The principled are often ridiculed as not being pragmatic, when in fact most often, over the long run, sticking with solid principles is highly pragmatic.

Those who represent large numbers of people or organizations with conflicting goals or self-interest quickly find they cannot make everyone happy — whether they are an elected official or an officer of a professional or business or some other organization.

Kim Strassel of The Wall Street Journal wrote a most insightful piece published the past Friday about how the U.S. Chamber of Commerce (the world’s largest business federation) made a most costly blunder by wanting to appear bipartisan, rather than sticking to a principled defense of free enterprise and limited government. Ms. Strassel argues that the Chamber’s endorsement of 23 Democrats (15 of whom won) may have enabled the Democrats to control the House, where they only have a six-vote majority.

These Chamber-endorsed Democrats are giving every indication of supporting higher corporate and capital gains taxes, and other measures that Speaker Pelosi and President Biden have called for that will be costly to the American business community and to the economy — in contrast to the official position of the Chamber. 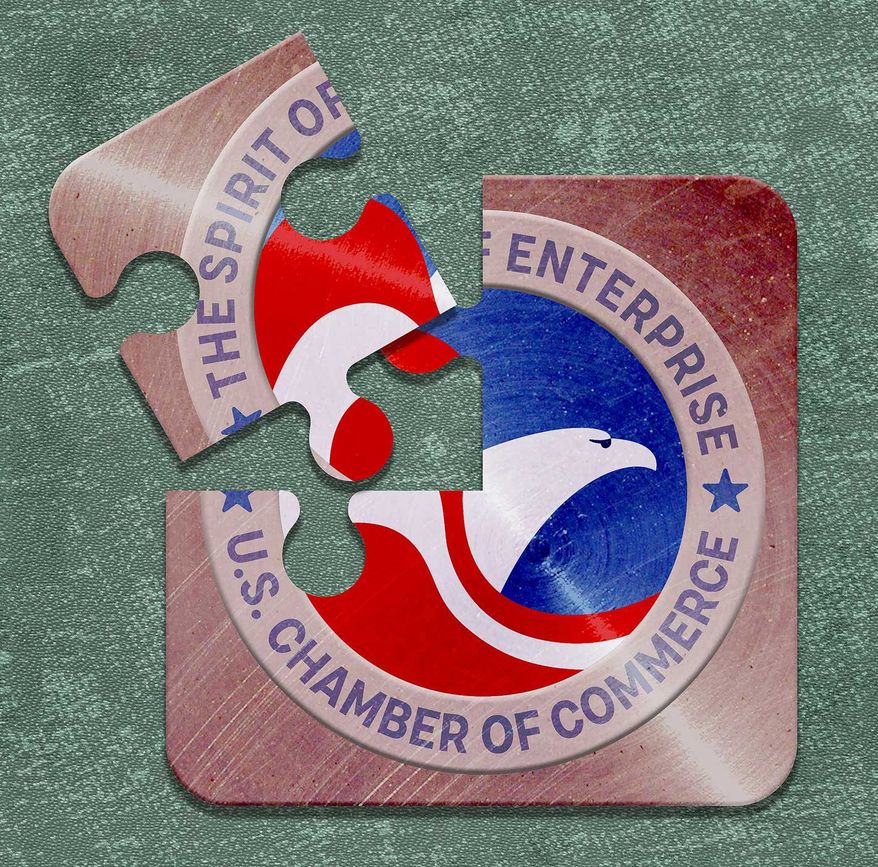 Business organizations such as Chambers of Commerce that represent companies engaged in many different businesses — from mom-and-pop businesses to the very largest ones — will always have many conflicts among their members. Large companies, through their lobbying efforts, often are able to insert special tax and/or regulatory provisions in legislation or administration regulations that benefit them over their competitors or other types of business.

As one example, banking and financial firms tend to be highly regulated. The big banks have large “compliance” operations to cope with the tide of regulations. The cost per customer of each regulation is manageable for the big banks because the fixed cost of the regulatory compliance system is shared over many customers.

The smaller banks, with limited customer bases, are saddled with much higher cost per customer, which gives the big banks an unfair advantage. As would be anticipated, the smaller banks expect the business organizations to work against overregulation, whereas many of the big banks are perfectly happy with the status quo.

During the 1980s, I was the chief economist of the U.S. Chamber of Commerce and, under the organizational structure in place at the time, my division was responsible for managing and implementing tax, spending and some regulatory policies. So on a daily basis, I had to deal with conflicts among the Chamber members — which directly or through the affiliated state and local chambers represented most of American business.

To deal with the problem, the board and senior management of the Chamber set forth a set of principles against which all legislative and regulatory proposals would be evaluated. The principles were classic free-market ones — smaller government, lower taxes on labor and capital, cost-benefit analysis applied to all regulation, rule of law, protection of private property, free trade, etc.

At the time, the “supply-side” movement was well underway, with the Wall Street Journal editorial page under former editor Bob Bartley making the case day in and day out. One of the editorial writers, the late Jude Wanniski, was particularly persuasive, having learned his economics from Art Laffer and Nobel Laureate Bob Mundell (who passed away earlier this month). I had worked with Art and others on building a supply-side model a couple years earlier and thus was in the position to sell the ideas to the business community — since the supply-side tax proposals fit perfectly with the Chamber’s principles.

The late Congressman and VP candidate Jack Kemp led the movement in Congress and was quickly joined by future Speaker Newt Gingrich, Majority Leader Dick Armey and many others. The Kemp-Roth tax cut proposal quickly became the Reagan tax cut proposal – as Jack Kemp and Art Laffer found President Reagan an easy sale. (Reagan had his degree in economics, as he frequently noted, “before Keynes wrote his book.”)

The plan called for a large reduction in marginal tax rates both for individuals and businesses (including better depreciation schedules, lower capital gains tax rates, etc.). There were some large businesses that had managed to pay almost no corporate income taxes because of special provisions in the tax code, and many of these provisions were slated for elimination — which caused much heartburn among those businesses. The Chamber did lose a few members over its endorsement of the Reagan tax cuts – but it turned out to be a small price to pay.

During the Clinton administration, the Chamber made the mistake of getting away from principle and endorsed Hillary-Care at the behest of a few prominent members who thought they could shift the cost of their health care to the government. That endorsement turned out to be a huge mistake, with the Chamber losing many members and its reputation as a principled policy organization.

The Chamber needs to relearn the lessons of the 1980s and go back to first principles. At the same time, it needs to build a coalition in Congress, the broad policy community, and with sympathetic media to return to limited government and free markets, rather than trying to compromise with those who have no principles.