China’s economic virus is likely to be much more dangerous to the world than the COVID-19 virus. We know from history that the consequences of recessions tend to cost many more lives than disease epidemics.

Yes, there will be a tragedy of many thousands dying prematurely from the coronavirus; but it will largely disappear by itself, and a vaccine will be developed. A severe economic virus, resulting in a global recession, will affect almost everyone to some degree and last much longer. 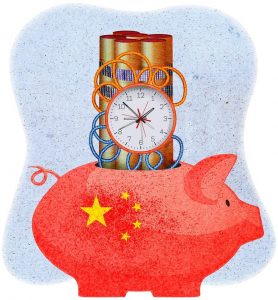 The Chinese economy was already slowing and facing a major debt crisis well before the outbreak of the coronavirus. Government, business and household debt burdens have been growing in many countries to worrisome levels but nowhere more than in China, the world’s second-largest economy.

The temporary economic shutdown of major areas within China and many businesses is likely to cause a severe deterioration in credit conditions, which were already weakening. Asset and property values will fall, causing defaults on corporate and personal loans. These failures will cascade through the banking system, causing credit markets to freeze up, which will, in turn, cause businesses and households to slash spending.

Demand for goods and services will fall sharply, hurting both domestic and foreign suppliers. The United States has far less exposure in terms of investment in and foreign trade with China than most Asian countries. Also, many Asian and African countries have become addicted to Chinese investment, in part, because of the Chinese Belt and Road Initiative projects. Thus, the consequences of a Chinese recession will be later and less damaging to the United States than to many other countries.

The sharp contraction in the Chinese economy and the freezing up in credit markets will eventually hit every economy in the world, directly or indirectly, thus likely leading to a global recession because of the high level of interdependence among all of the major economies. The major central banks of the world, including the U.S. Federal Reserve, are about out of ammunition. Many of their balance sheets have record-high levels of government debt, and interest rates in Europe and elsewhere are near, and in some cases below, zero. The U.S. Fed still has a little room left, but not much, to cut interest rates. At this level, interest rate cuts may not do much to stimulate borrowing.

Certain sectors of the U.S. economy are already being hit. Those companies that have a large exposure to the Chinese market (many high-tech and automobile companies, for example) are going to see a significant drop in sales. Companies that source raw materials and component parts in China are likely to suffer some supply disruptions.

The tourist industry is taking a major hit as people cancel both business and international pleasure travel. U.S. domestic travel may pick up some, but that will be offset by the reduced numbers of foreign visitors. Airlines, hotel chains, cruise ship operators and others will see both profit and sales declines. To protect their bottom lines as much as possible, they will cease hiring new workers and lay off some of their existing workforces.

There are some bright spots. Homebuilding has been very strong, and further reductions in interest rates will be beneficial, as well as a reduction in prices of supplies as worldwide demand falls for metals and other building materials. But domestic suppliers of building materials will be squeezed by the worldwide price drops.

There is likely to be a new round of mortgage refinancing as mortgage rates fall again. This is a two-edged sword. Lower interest rates are great for those who are buying homes or have mortgages, but hell for those who are living off interest payments on their savings.

What should the United States do to stop a coronavirus recession? As noted, the Fed (in terms of monetary policy) has few tools left. It can drop interest rates a little — and inject more liquidity in the economy — through more government bond purchases as needed.

The Trump administration’s efforts to reduce regulatory drag was successful in spurring economic growth, but there is much more that needs to be done — and a renewed effort needs to be undertaken. State governments and local governments are the sources of many counterproductive regulations, so governors and mayors, etc. need to be encouraged to be more pro-active in the deregulation effort.

Politicians — mainly Democrats, but also a significant number of Republicans and the economically ignorant members of the mainstream media — will call for massive government spending increases which, as always, will be counterproductive. Remember how President Obama’s trillion-dollar “shovel-ready” spending package in 2009 fell flat and actually slowed down the recovery?

A properly structured tax cut could mitigate much of the fall in income. Cutting everyone’s marginal rate would be the most sound policy, but the political reality is that Democrats will scream “a give-away-to-the-rich,” so the fastest and easiest way may be to just greatly increase the basic exemption for everyone, which would mostly benefit the middle class. And yes, it will add to the deficit, which is bad, but with interest rates near zero, the tax cut gain will swamp the additional debt-burden pain.