Last week, an ad appeared in The New York Times, The Wall Street Journal and perhaps elsewhere, “signed” by 100 companies and several thousand individuals. The ad was titled: “We stand for democracy” as if that statement required great courage. 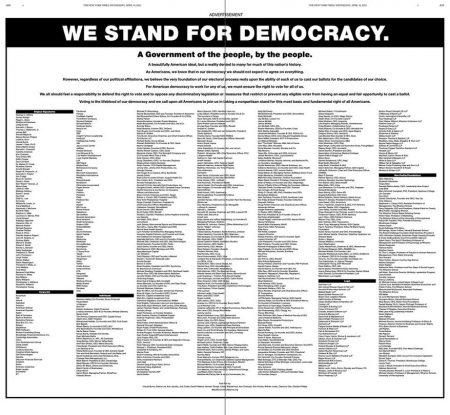 The operative sentence in the ad was: “We all should feel a responsibility to defend the right to vote and to oppose any discriminatory legislation or measures that restrict or prevent any eligible voter from having an equal and fair opportunity to cast a ballot.”

The ad was supposed to be some kind of statement against the Georgia voter integrity law, and it caused many who likely never read the law to buy into the false charge that it is “Jim Crow” — even though about 45 other states have similar provisions, such as requiring a voter ID. The real purpose of the ad was to give the Democrats a virtue signal that the leadership of the named corporations and the individuals who signed the ad are supporting the Biden administration, no matter how foolish and counterproductive its policies might be. There is a common crude term for this type of behavior that everyone knows.

Fortunately, there is an easy way to test the sincerity of all of those who signed the ad. Ask them to sign a similar ad with the same title, “We stand for democracy,” but change the operative sentence (above) to: “We should all feel a responsibility to defend the basic civil liberties of those living under the rule of the Chinese communist party, including the right of free speech, press, assembly and religion, and the right to vote for the candidates of choice.” It is a safe bet that Amazon, Target, Apple, Facebook, American and United Airlines, Viacom, CBS and all of the other woke companies and individuals who signed the original ad would never sign this one. So much for principles and courage.

Unlike the State of Georgia, China really does deny the right to vote, and it throws people in jail or worse for engaging in free speech or protesting the genocide of ethnic minorities. It takes no courage to oppose Gov. Brian Kemp of Georgia, even if you have business in Georgia, but it takes real courage to oppose President Xi Jinping of China, especially if you are doing business in China.

The myth has grown that almost all of American business was behind the Reagan economic program, including the tax cuts. Not true. The Reagan tax plan was to reduce tax rates and regulations, but also to close a number of tax preferences. A number of the big companies had successfully lobbied over the years to obtain tax preferences and regulations that benefitted them and hurt their competitors. (In the same way, Amazon greatly benefitted from the pandemic shutdowns which caused great damage to its smaller competitors. This past week, the WSJ described in detail how the proposed Biden tax increases will advantage Amazon relative to other businesses — no wonder The Washington Post owner, Amazon CEO Jeff Bezos, loves the Biden program.)

Despite a number of large companies being AWOL, most small and entrepreneurial businesses were very pro the Reagan tax cuts; and the U.S. Chamber of Commerce, where I was chief economist at that time, took the principled position to support the Reagan program because it was pro-growth and pro-economic liberty. (Having been part of the team around Art Laffer, Jack Kemp and others who developed the supply-side Reagan program, part of my role was to sell it to the business community.)

Many leaders of large companies have little understanding of the Scottish Enlightenment (property rights), the American founding and the key elements of the economic system that allows them to prosper. Also, many have a very short-term view of the world and what is in the interest of their own enterprises — which often causes them to support public policies that will do great damage over the long run.

Fortunately, there are always some principled business people who will stand up for the free-market capitalistic system despite an often hostile press. One of the best examples of a businessman with principles, courage and a long-run view was the late Bob Krieble, who, with his father — both Ph.D. chemists — developed what is commonly known as super glue some six decades ago.

Having created a global company (Loctite Corp), Bob was a firm believer in free markets as the way to better mankind. He made substantial contributions to many economic liberty and policy organizations, and he provided necessary help to establish underground pro-free market democracy groups in Eastern Europe and the USSR in the years before the communist collapse.

Even though he was ridiculed, as tilting at windmills, by some in the business establishment and press at the time, when the collapse occurred, he was rightly considered a hero in the newly freed countries. (He even had the foresight to fund Boris Yeltsin’s first trip to the U.S., enabling Mr. Yeltsin to meet with U.S. political and business leaders, before he gained power in Russia.)

A prosperous civil society requires the rule of law, private property rights, free markets, sound money, as well as voter integrity, and non-oppressive government spending, taxes and regulations. Those conditions can only be maintained by those willing to forego momentary passions and praise and act on principle.