The American republic was founded to protect persons and property and ensure liberty. Yet, many of those running for president are producing a never-ending stream of proposals to diminish protections for person and property and destroy liberty.

Proposals to protect illegal aliens, including those with criminal backgrounds, by restricting the U.S. government’s ability to deport them, make all citizens less safe. Policies (such as those in place in Seattle), whereby police do not prosecute shoplifting or other theft beyond some not insignificant dollar amount, deny the law-abiding the right to have their property protected and encourage more theft. Many of these jurisdictions and states make it very difficult for citizens to obtain guns in order to protect their property and person.

Most dictatorial regimes start off by making gun ownership difficult before they get around to banning them outright. Beto O’Rourke and other Democratic presidential candidates want to take your guns — at least some of them — at gunpoint if necessary. They argue that no one needs an assault rifle to hunt elk (actually you need a more powerful gun to do it properly). This stupid argument misses the whole point. We don’t need guns to protect ourselves against elk. We need them to protect ourselves against Beto and his ilk, because they are out to take away our freedoms, unlike the elk. 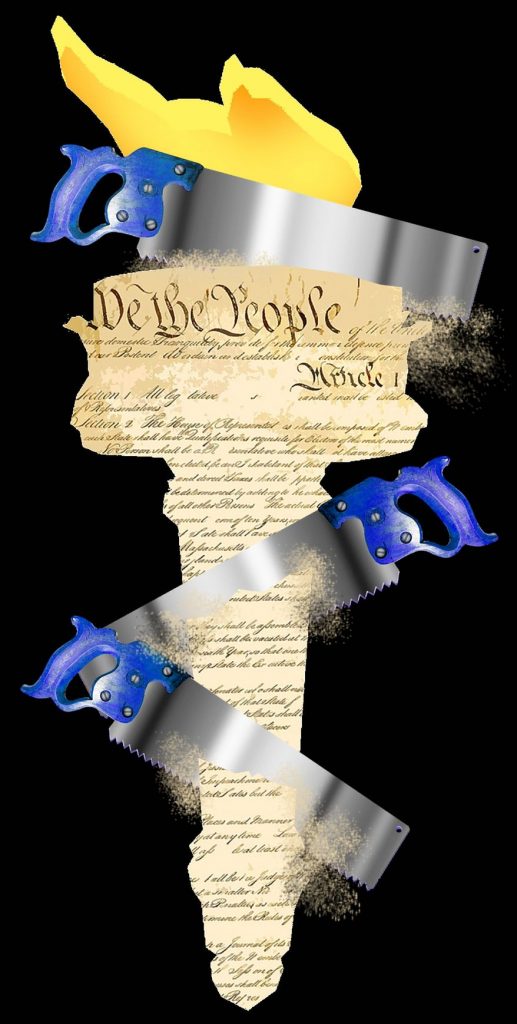 Many of the current crop of politicians are out to take away our right of free speech and religion. We are not allowed to use words they don’t like, but most profanity is OK. I was a student at Columbia University during the free-speech movement of the Vietnam era — at which point we could tell ethnic jokes but were not allowed to refer to certain human body parts or sexual activities. I had lost an eye, and fortunately one-eyed jokes were not banned — so I heard and collected many because the joke tellers rarely meant to offend but merely to establish a bond. Dave Chappelle uses the N-word liberally in his new Netflix show. And that is to the good, because it is a direct attack on the word police.

President Trump was attacked by the word police because he called what has been happening to him a “lynching.” But then, videos emerged (thank God for videos) of Joe Biden and many other Democrats using the same word at various times — so, of course, the outrage subsided.

The government has no business regulating speech other than that used in misrepresentation of a good or service or causing direct danger (fire in the theater). I suspect that there is a growing majority which is tired of the faux or even real upset experienced by snowflakes. Either get over it or walk away. Your uptight humorless world is offensive to me.

If you are required to spend virtually 100 percent of your time working for the government — which the new communists and socialists call the collective good — it is because all of the “free” stuff requires very high levels of taxation. It is modern-day slavery, because you have lost the right to most of the product of your own labor. Medicare for All, free college, cancellation of student loans, etc. etc. may sound wonderful for those who failed math — but in the real world, even with massive taxes on everyone (not just the rich), it doesn’t pass the laugh test.

Sen. Elizabeth Warren says she will put in a wealth tax to help pay for it all. Assume you have a bucket of gold coins in your basement worth $50 million. The first year the tax man comes by and takes 20 percent of them. In year two, the taxman comes by again and asks for another 20 percent. How much does the taxman collect in year two? The answer, of course, is zero — because the bucket of gold coins is no longer in the basement. It is in one of the vast majority of countries with no wealth tax. France and some other countries tried the wealth tax experiment and, as any smart 12-year-old could figure out (as contrasted with socialist politicians), it did not work out as advertised.

All of the candidates say they will ban fracking and prohibit fossil fuel-powered vehicles by some magic year in the not too distant future. As noted above, the candidates appear not to have read or at least understand the U.S. Constitution, and somehow missed their math courses. They also appear to have all failed physics. It is not possible to operate a reliable electrical system with only wind and solar power, unless there is a huge amount of costly battery, or conventional or nuclear power backup. Batteries will get better — but at what cost and how soon? An all-electric car fleet will put huge additional demands on the power grid. There is nothing wrong with making an all-electric world powered by renewables, provided they are less damaging than natural gas, but placing arbitrary dates that cannot meet engineering and economic realities is dishonest.