There is some information that the government should never publish because it is so little understood by the political class and the media. A prime example is the trade deficit number. The trade deficit is of little importance, but as we now see, a focus on that number is causing the president and others to impose destructive tariffs and other harmful trade restrictions. The trade deficit, which is officially known as the “current account balance,” is merely the residual of many other policies by both the U.S. and foreign governments. 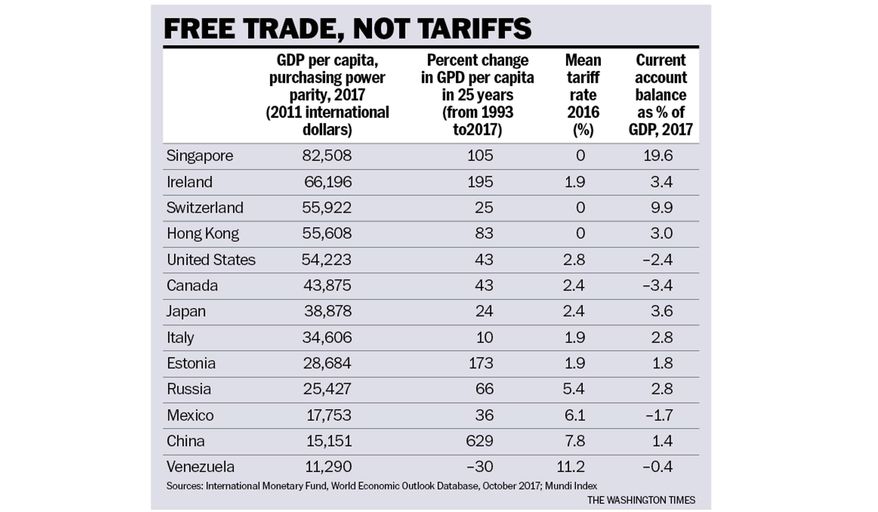 If you look closely at the enclosed table, you will see there is no obvious relationship between a country’s trade deficit, level of prosperity, growth in GDP per capita or tariff rate. In the table, I have chosen 13 representative countries to illustrate the points that I am making. I could have listed every country in the world, and the same lack of relationship among the listed variables would be obvious.

Some rich jurisdictions, like Singapore, Switzerland and Hong Kong, have zero tariffs (free trade) and run large trade surpluses. Some high-tariff countries, like Mexico, have run trade deficits, while having had low growth rates, coupled with a low per capita income. China has had a very high rate of per capita economic growth over the last 25 years, and high tariff rates, but still has a relatively low per capita income. Japan and Italy have had relatively low tariff rates, and low growth, but substantial trade surpluses.

Italy and Ireland have had the same relatively low average tariff rate (both being members of the European Union), and both run trade surpluses. In 1993, Ireland had a per capita income about 50 percent lower than Italy. Now, Ireland has a per capita income almost twice as high as Italy. Clearly, tariff rates and trade balances have had nothing to do with this huge disparity in relative economic performance.

An argument proponents give for tariffs is that they will increase the prices for the foreign goods, thus discouraging Americans from buying them. This action is supposed to reduce the American trade deficit. Virginians buy many more oranges from Florida than Floridians buy hams from Virginians, causing Virginia to run a trade deficit with Florida. Should Virginia put a tariff on oranges in an attempt to get Virginians to grow their own oranges (in greenhouses)?

Foreign governments often wish to acquire U.S. dollars to serve as reserves to back their own currencies or financial instruments. They acquire the dollars by having their domestic businesses (that have acquired dollars through trade) exchange their dollars for the local currency.

Remember, the U.S. dollar is the reserve currency of the world, and as a result, U.S. citizens reap the benefit of having foreigners buy paper U.S. dollars or dollar-denominated government debt at zero or very low interest rates. For foreign individuals, businesses or governments to increase their holdings of U.S. currency or financial instruments requires the U.S. to run a trade deficit.

Many non-U.S. citizens like to keep part of their wealth in the U.S. because of political stability, an honest court system and strong protection of private property. Foreign interests investing in U.S. government securities, the stocks and bonds of U.S. companies or in Miami real estate is all to the benefit of Americans.

Also, the trade deficit enables Americans to buy inexpensive toys in exchange for providing foreign toy makers little green pieces of paper, many of which will never be redeemed. What a deal.

The U.S. government has been keeping foreign trade statistics since 1790. In the majority of years, the U.S. ran a trade deficit and an offsetting capital surplus (meaning more money was invested in the U.S. than U.S. companies and individuals invested in the rest of the world). The U.S., by productively using inexpensive foreign capital, was able to create the world’s biggest and wealthiest economy.

Finally, it is true that China and some other countries engage in destructive trade practices, and these should be dealt with directly. The goal should be to move the world toward more free trade, not to eliminate the U.S. trade deficit.