Europe Slides into the Poor House

Athens: Europe’s most significant contribution to the world economy at the moment is serving as a bad example. Much of Western culture and law can trace its origin back to this city of 2,500 years ago. The ancient Athenians learned that democracy is fragile and can lead to bad outcomes — not that other governing systems have proved to be more successful over the long run.

One of the fatal flaws of democracy is the recurring irrationality of the people to vote themselves benefits that they are unwilling to pay for. The idea of getting something for nothing is so powerful that politicians have used the same con everywhere on the planet for thousands of years. The end is always the same. The music stops when the cupboard is empty. Greece is exhibit A at the moment of what happens when a country spends more than it produces without restraint. At some point, the lenders say, “no more — you must live within your means.”

For Greece, this has resulted in an approximately 30 percent drop in real per capita income during the last decade and an unemployment rate of 18 percent. 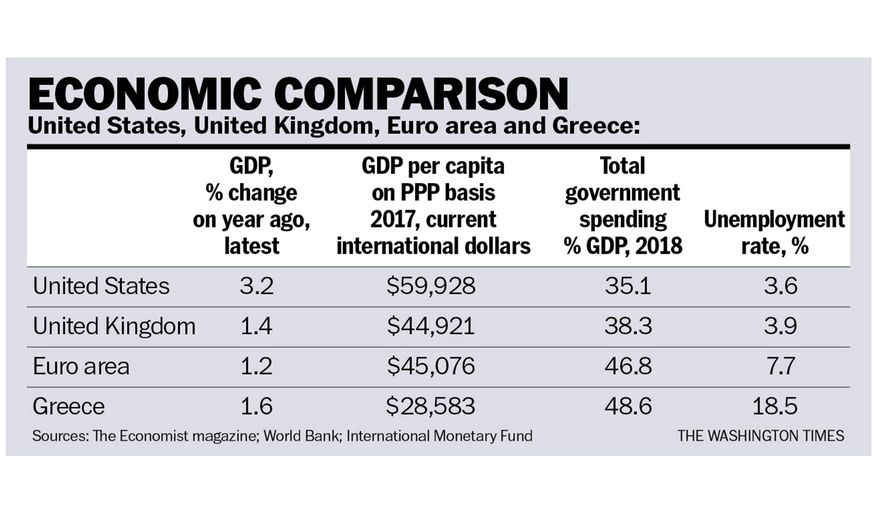 Greece was the first EU country to go into a managed debt default and a reduction in living standards to reflect “pay as you go.” Unfortunately, Greece will not be the last. At some point in the not-too-distant future, both Italy and France are going to face a day of reckoning when they, too, will no longer be able to live on borrowed money.

There is no mystery to the European disease: Excessive government spending not justified on a cost-benefit basis, including many “green” projects that have failed; tax rates far above the revenue and welfare maximizing rates that have only undermined the desire to work, save or invest; and regulations that make no economic sense and are so numerous and complex they only serve to undermine the rule of law.

Europe, as well as other parts of the world, is literally killing itself by not having babies. Most European countries now have fertility rates well below that needed to keep the population stable — forget about growing. A shrinking population adds to the relative burden of taking care of the elderly — fewer workers to support an increasing number of retirees. An unsustainable downward spiral is underway.

The Europeans also undertook many foolish “big green” projects that failed to reduce CO2 emissions and made the cost of energy non-competitive with the rest of the world. The Germans are now going back to building coal plants. At the same time, the United States embraced fracking, allowing it to move to cleaner energy (natural gas) and reduce both CO2 emissions and electricity costs.

Modern Europe is the result of the denial of physics, biology and micro-economics by too many politicians and two generations of ignorant voters.

The United States is now growing at more than twice the rate of Europe and is enjoying full employment. In fact, there is no big developed country that is even close to the United States in terms of economic performance. China continues to do well, but despite very rapid economic growth, its per capita income is still less than a fourth of the United States. China has a long way to go — particularly in the modernization of its financial system — which is still largely state-owned.

The main reason the United States looks so good is that Europe looks so bad. Despite its recent success, the United States still could do better. As an American, it is disappointing to see how many U.S. politicians (mainly Democrats) have studied the causes of European stagnation, but are advocating many of the same policies that are destroying Europe. On average, living standards are about one-quarter lower in the EU than in America and unemployment rates are twice as high.

There is nothing inherent in the geography, climate, natural resources or peoples of Europe that keeps them poorer. It is merely a function of bad policies and poor leadership. What Europe, and the U.K. in particular, needs is a new Margaret Thatcher. A person clear-eyed enough to see what needs to be done, and then the toughness and strategic sense to deliver.

There are islands of success within Europe which can serve as good examples. Little, land-locked, resource-poor Switzerland has managed to build a strong economy and a very civil society with the rule of law. The Swiss have even managed to earn a higher per capita income than the United States. If Switzerland can succeed, as it has, then there is no reason the other nations of Europe cannot do equally well.