How Much Should Taxpayers Be Forced to Spend to Militarize D.C.? Nearly a half-billion dollars of taxpayer money in last six weeks

Should taxpayers be forced to spend approximately 1 million dollars to protect each member of the House and Senate in the absence of specific threats to justify such expenditures? 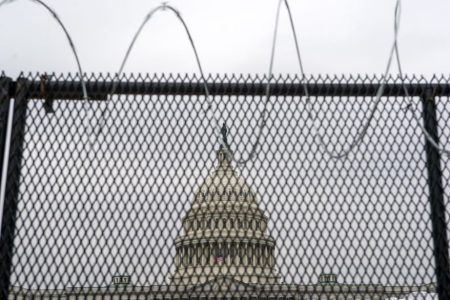 According to the AP, nearly a half-billion dollars of your money has been spent on the militarization of Washington, D.C., over the last six weeks. “The nearly $500 million includes the costs of transporting Guard troops from their states to Washington, their salaries and benefits, as well as housing and other essentials. … Between 5,000 and 7,000 troops are scheduled to stay in Washington through March 14.” All of the other additional security measures, including the massive fencing around the capital, etc. will cost tens of millions more.

Does this meet a reasonable cost-benefit test — as well as the test of what is appropriate in a “free” country? Government officials have been unwilling or unable to provide details on any specific threat to justify the expenditure.

There is a way to test the proposition that too much is being spent on security per member. Suppose the 535 members of Congress were told that they each had a budget of up to 1 million to spend on their own security and that of their immediate family. But whatever portion of the million they did not spend on security (e.g., obtaining a bodyguard, an enhanced home security system, training and arming certain members of their own staffs to act in an emergency, etc.), they could use for their own personal expenditures — no questions asked.

Place your bets on how much they would spend on security versus new luxury cars, top-of-the-line vacations, etc.

Everyone knows that it is very easy to spend other people’s money. Politicians casually spend taxpayers’ money on things they would never choose to buy on their own. According to USGovernmentSpending.com: “Total U.S. government estimated spending for 2021 is $8.16 trillion, including a budgeted $4.83 trillion federal, a ‘guesstimated’ $2.05 trillion state, and a ‘guesstimated’ $2.1 trillion local.”

On a per-capita basis this amounts to $24,497 for every man woman and child in the U.S. — of which $14,545 is federal, $6,095 state and $6,298 local spending (there are $2,400 in intergovernmental transfers which have been netted out). This means for a family of four, total government spending is approximately $100,000 — far more than the disposable income for the average American family.

Congress is now debating the so-called COVID relief bill. The Democrats have proposed spending $2.2 trillion, which would include a payment to each adult American of $1,200 (or perhaps $2,000 or $1,400 or $900) under a certain income limit. Everyone wants free money — but the problem is that the federal government has debt of about 100% of GDP and is running a massive deficit — so there is no money. But never mind, the government can just go ahead and print whatever is needed to cover the spending.

Sending $1,400 checks to everyone to help them pay past-due bills or take a vacation may sound nice — but it is not enough to alter most anyone’s lifestyle and it has a number of negative effects. To understand the downside more easily, assume for the moment that the government is going to send out checks for $100,000 to everyone.

Many people would probably decide to take off work for a year or retire early. The result would be much less productive activity — resulting in fewer goods and services being produced — which will soon cause most people to be poorer rather than richer. The same is true, to a lesser degree, for smaller payments.

Over the centuries, many governments have tried to make their citizens wealthier by merely giving them more money for nothing or for non-productive activities. It never works — in theory or practice. $2.2 trillion works out to about $6,500 per person, but the politicians are arguing about how much of that to give directly to the people and how much to launder through various (and for the most part special-interest) spending programs. The spending bill includes an additional $300 million to National Public Broadcasting … which serves primarily as a propaganda arm of the Democratic Party.

There is a line item to give the JFK Center for the Performing Arts in Washington an additional $35 million. A nice subsidy for the affluent people in the D.C. area — and, of course, members of Congress and their staffs — who are the primary audiences for the Kennedy Center. (Note: there is no provision for country and western band halls in much of middle America — but their audiences are not as “refined” and hence not as deserving as the elitist snobs that lurk in Washington.)

There is also a line item for another $25,000,000 for “cleaning supplies” for the Capitol Building, which is rather ironic since it has been fenced off for most ordinary folks (so we must assume that many of the politicians who work in the Capitol are a dirty lot).

Have you noticed that most successful businesses prepare budgets down to the nearest dollar — while big government budgets tend to get rounded off to the nearest $5 million, or billion, or $100 billion? Message to taxpayers: You can tell how little we care about how hard you work for each dollar by how carelessly we spend the fruits of your labor.