How Much U.S. Debt Is Too Much? United States must restrain entitlement spending

Worldwide debt levels, including public, business and household debt, have reached record levels, not only in absolute terms but also as a percentage of global GDP (well over 300 percent), which is worrisome.

If a person’s debt load causes the cost of servicing the debt to rise faster than income, eventually there will come a day of reckoning where assets will be taken or sold and the debtor will be left poorer. If a business is imprudent and borrows to invest on projects that fail to yield more than the cost of the debt, it will be forced to downsize by selling assets, including, perhaps, the whole company, or declare bankruptcy. 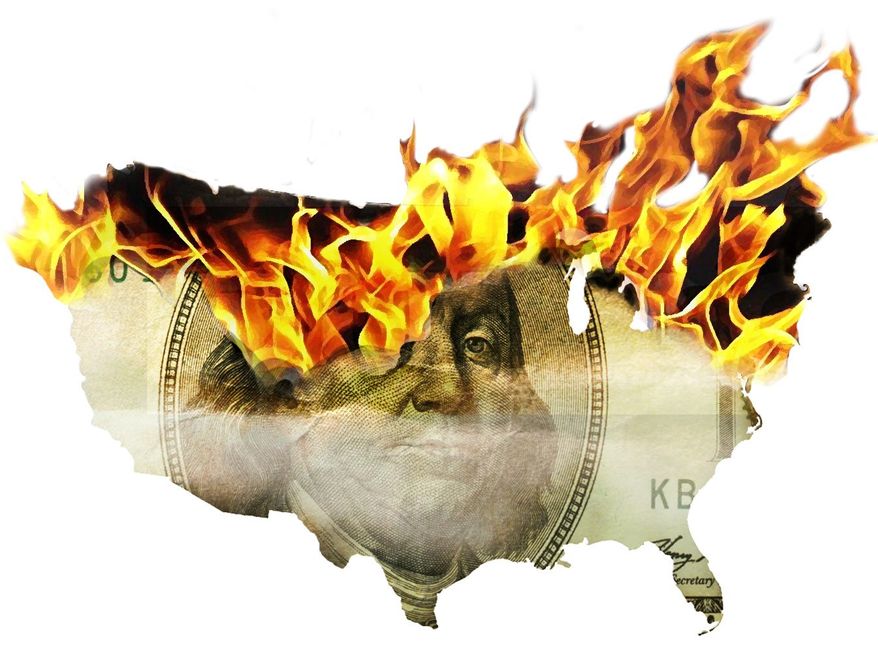 The world has gone through many cycles where individuals and businesses became insolvent because of too much debt. Such episodes are painful, but, at least in developed countries, there are well-established mechanisms for legally dealing with the problems without it bringing down the whole economy.

Too much public debt brings much greater concerns, including the real possibility of a global debt crisis where hundreds of millions lose their jobs and suffer large cuts in their standard of living. In the past few years, individual country debt crises have been contained — Greece and Argentina are examples. But what happens if Italy or Japan or even China find themselves unable to service their debt at a sustainable interest rate –- which is a real possibility?

The Greeks and the Argentines have suffered roughly a 30 percent average drop in their living standards with little effect on the outside world. Some U.S. cities, like Detroit, have gone bankrupt from too much debt. The restructurings have been painful to the workers and pensioners who have lost real income, and to the citizens who have fewer public services. But again, the direct pain was contained to some thousands rather than tens of millions.

Politicians love to spend other people’s money to buy votes (which they call government investment in projects or people), but they don’t like to tax the voters to pay for the expenditures, because that causes pain. So if the politicians can borrow money at low interest rates, it is a win-win for them. Of course, the next generation of citizens is going to have to pay for the benefits given to today’s voters — but oh, never mind, because the politicians who were responsible will be long gone. Democratic systems have an inherent tendency to result in higher levels of spending than the voters are willing to pay for — for which the debt market provides a temporary political solution.

Why don’t politicians everywhere borrow even more to buy votes? Most of the Northern European countries have maintained responsible GDP debt ratios, while many of their southern neighbors have not. The Swiss, and now even the Germans, have put in constitutional “debt brakes” to restrain debt and spending increases. Since the differences in behavior cannot be totally explained by differences in economic incentives, some economists have concluded it is a matter of culture. 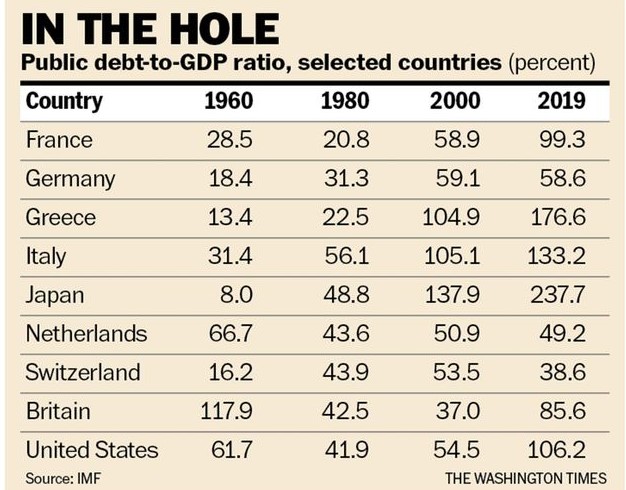 Within the U.S. states, localities differ greatly in debt and spending practices. Places like Chicago and the State of Illinois have been widely irresponsible when it came to funding government programs with massive unfunded liabilities. New York and New Jersey have governments that spend, tax and issue debt at unsustainable levels, while Florida and other states tend to balance their budgets while maintaining relatively low tax rates. The result is increasingly obvious as rich New Yorkers move to Florida, further undermining the New York tax base and making the state poorer. Californians are increasingly moving to Arizona, Utah and Texas for the same reasons.

But what happens if the U.S. government follows the New York model rather than the Florida model? Federal expenditures (even without new programs) will rise over the next three decades from the current 21 percent of GDP to about 30 percent — a 50 percent increase.  Such an increase will require either massive tax increases or massive debt increases, either of which is likely to tank the economy — making everyone poorer.

Relatively modest changes in the two biggest federal entitlement programs — Social Security and Medicare — can avoid this fate, but it will take responsible political leadership.

The reason for great concern is that all of the Democratic presidential candidates are proposing many trillions of dollars in new spending, and President Trump, to date, is ignoring the growing entitlement spending problem.