Some busybodies will argue it is unfair that companies that operate in Texas do not have to pay any state income tax and can pay their workers a lower minimum wage than those that operate in California, giving the Texas companies a cost advantage. Those who think that Texas has an unfair advantage might propose an “equalization tax” on products coming from Texas to make their costs equal to California’s. Fortunately, the Commerce Clause (an anti-busy-body provision) in the U.S. Constitution prohibits states from doing such things, and thus providers of goods and services may sell their services in any other states (with few exceptions, such as some insurance products) without discriminatory surcharges. 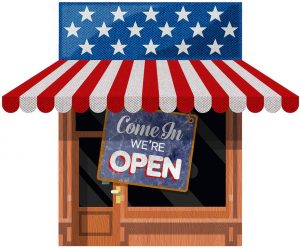 The Framers of the Constitution understood that free trade among the states, based on mutual recognition of differences in policies and natural conditions, would maximize consumer satisfaction and the wealth of the people. Free trade benefits producers, consumers and workers by increasing the extent of the market, thereby allowing for more efficient production and lower cost per unit. It also allows for “comparative advantage,” where each jurisdiction can use its natural advantages, such as low-cost water power or the abundance of oil and gas, to their best and highest use. The benefits not only accrue to the low-cost jurisdictions, but also to its trading partners by enabling them to specialize in other things by freeing up labor and capital to the long-run benefit of all.

Most likely, the United States will soon begin serious negotiations with the newly independent U.K. on a free-trade agreement, as well as speed up negotiations with Switzerland and other countries on expanded trade agreements. For these proposed new agreements to be entirely successful, the principle of “mutual recognition” needs to be followed, rather than allow meddling busybodies to demand never-ending exceptions.

A free-trade agreement between the U.K. and the United States will provide great economic benefits to both countries — but one can be sure that busybodies will try to sabotage it by doing such absurd things as insisting that U.K. drivers switch to the right side of the road from the left side, and that the U.K., Switzerland and others adopt U.S. tax and securities laws. The U.K., of course, will want to keep the City of London as a global financial center, which will require certain mutual recognition accommodations in both tax and securities law. In decades past, the Swiss found themselves in trouble with the IRS in the United States because they failed to recognize and accommodate to the fact that some tax requirements in the U.S. law were contrary to the Swiss law.

There are international organizations that are largely staffed by busybodies trying to make life difficult for productive and innovative people and governments throughout the world. Perhaps the world’s worst busybody is the Organization for Economic Co-Operation and Development (OECD).  The OECD just came out with a new “blacklist” of jurisdictions that were not taxing or financially reporting up to OECD levels — which, of course, are completely arbitrary. Most of the jurisdictions listed are small countries with limited ability to defend themselves against the OECD big high-tax countries masters.

If the OECD had the power to sanction individual U.S. states, one would expect it to attack such places as Florida, Nevada, Wyoming, Tennessee and other states that do not have income taxes and have fewer reporting requirements than busy-body states like New York and California.

It is, perhaps, the nature of man to try to tell others how they should live. Too often, big bullies get away with it, whether they be individuals or governments. Mike Bloomberg, former New York mayor, is the ultimate busy-body bully. For whatever reason, he felt that he had the right to tell New Yorkers the size of a soda they were allowed to buy. He did not only inflict his dictatorial tendencies on New Yorkers, but he also spent huge amounts of money to buy members of state legislatures outside of New York, with the order that they enact gun restrictive laws to his liking. His actions, among other things, have caused a political civil war in the formerly peaceful Commonwealth of Virginia.

Thoughtful people have long recognized that a key to peaceful relations among individuals, groups and governments is mutual recognition and tolerance of differences. Busy-bodies, with few exceptions, such as child abuse, have no right to tell others what laws they should have, including tax and securities laws, what foods they should eat, etc., and how to conduct their lives as long as they do not directly interfere with physical well-being and property of others.