It is hard to succeed if everyone is leaving. Some of the former communist countries are suffering from a population death spiral, with double-digit population declines over the last 25 years, as can be seen in the enclosed table. 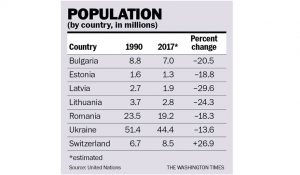 The problem is not only that people are leaving these countries, but all too often it is the most productive who are leaving — i.e., young adults. Those who are the least mobile — the unskilled, those with physical or mental disabilities and the elderly — i.e., the dependent class — are staying.

Latvia has lost almost a third of its population since it regained its independence in 1992. This would be equivalent to the United States losing approximately 100 million people. Other former communist countries have also lost major portions of their populations. The population loss is not only a result of emigration, but also very low birth rates (well below replacement). As noted, as taxes on employment are raised, it both discourages work and drives people to places where the real after-tax wage is higher. It is the social insurance taxes — for old age pensions, medical insurance and unemployment insurance — rather than income taxes that are the real job killers. The social insurance taxes on labor exceed 30 percent in many of the countries and can be over 50 percent in Romania. Bulgaria has a flat-rate income tax of only 10 percent on both personal and corporate income, while Lithuania has maximum rates of a relatively reasonable 15 percent. But when the income tax rates are added to the social insurance taxes, total tax rates on labor are well over 50 percent in most of the population-losing countries.

As would be expected, the excessively high taxes on labor not only have driven the working population to places where the real after-tax wage is higher, but have also fueled very large “shadow” economies. (A shadow economy is where people work at least part of the time off the books and where sales and profits are not reported to the tax man.) Some studies estimate the size of the shadow economy in the United States is about 11 percent. A week ago when I was in Ukraine, I noticed that there is extensive high-rise apartment and office building construction going on in Kiev — the capital of a low-income country engaged in a low-level war with Russia. Where are they obtaining the capital for these homes and offices? Ukrainian economists told me that the best estimates of the size of the shadow economy is more than 50 percent of gross domestic product, which means the real economy may be twice as large as the official one.

Last Friday, I was in the western Ukraine historic city of Lviv. The large and mostly restored old town was crowded with people enjoying the many outdoor cafes and fine restaurants and shops. People were well dressed and the streets were filled with recent vintage automobiles — clearly living better in the cities than the official statistics would indicate.

All through Eastern Europe, one finds vibrant and prosperous cities, such as Vilnius, while the rural country areas are hollowed out as people move to the major cities or to other countries, including the United Kingdom, Germany and the United States. where there are more high-paying jobs. Economist and former president of the Lithuanian Free Market Institute, Ruta Vainiene, told me the estimate of the size of the shadow economy in Lithuania is about 29 percent. She noted that a village near the border with Poland lost nearly all of its working-age people because they moved a few miles into Poland for higher wages. So much for the tax base.

Much of the rest of Europe is also facing stagnant or falling populations, which means a rising dependency ratio, mainly due to falling birth rates. The only way these countries can avoid real reductions in their pensions and other social programs is by increasing productivity and growth rates, which requires lower tax rates and fewer job-killing regulations. Switzerland is an example of doing it right with lower tax burdens in many of its regions, and a business-friendly environment. As a result, the Swiss have a labor shortage and need to import workers, which gives them a larger population of well-paid producers rather than dependents. The rest of Europe needs to learn from the Swiss.