Prague is a glorious city with many beautiful and historic buildings going back nearly a thousand years. It managed to escape almost all bombing during WWII, and thus was able to preserve the best of its past — to the delight of both citizens and tourists. I am here at the European Resource Bank for a discussion of the problems in protecting intellectual property (more on that below).

Thirty years ago, Czechoslovakia was a poor communist country (the Eastern portion, Slovakia, peacefully separated in 1993, creating two independent countries). Like the other communist cities, Prague was drab and depressing until after the transition.

It is now a rich, democratic, free-market country where the people are as prosperous as the Italians, Japanese and Spanish, with a per capita income of about $33,000 per year. It is a member of the European Union and NATO. According to the 2018 Index of Economic Freedom, it is more economically free than neighboring Germany, Austria and Poland.

It enjoys a 15 percent flat individual income tax, and the size of the government is about the same relative size of the U.S. — good by European standards but, like the U.S., too high to maximize the total welfare. Fiscally, it has been far more responsible than the U.S., with an average budget deficit of less than 1 percent and a total debt burden of a modest 38 percent. Contract and property rights are relatively secure, and markets are open with few trade barriers. 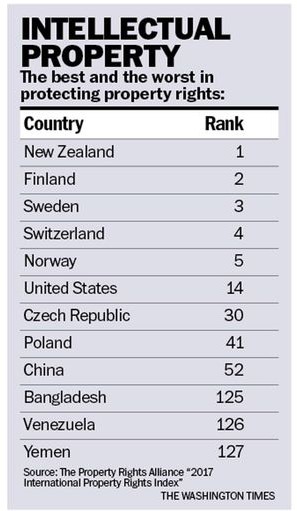 New Zealand ranks near the top in all of the sub-categories, with the exception of patent protection where the U.S. is near the top. As with the economy, property rights protections have all but collapsed in Venezuela, which is a death knell for any new investment.Property rights consist of a number of sub-categories, including patent protection, the rule of law, control of corruption, copyright piracy, and both physical and intellectual property rights protection. As can be seen in the accompanying table, New Zealand ranks Number 1. Venezuela and Yemen are at the bottom, China is near the middle, and the U.S. is at Number 14.

China is under attack by the U.S. and other countries by its failure to abide by the international trade and investment rules. It is asserted that China is particularly deficient in the protection of intellectual property, coupled with demands that such property be transferred to Chinese-owned or controlled entities as part of the price for the privilege of doing business in China. China has a long record of copyright piracy and counterfeiting products. Even though China is not the worst offender, it is considered the biggest problem because of the sheer size of its economy (Number 2 in the world), which is why the U.S. has aimed its sanctions at China.

Protection of intellectual property, including copyrights, trademarks, patents and know-how, as well as trade secrets, databases, plant varieties, etc., is now often more critical to the success of a business than physical property. Intellectual property has been recognized as needing protection for several hundred years.

The U.S. Constitution explicitly recognizes the need for and authorizes the creation of the necessary agencies of government, such as the patent office, to protect intellectual property. Intellectual property law was developed to encourage the creation of the development of new goods and services. Protection for new innovations is normally given for some stipulated period of time.

In recent decades, there has been a movement toward creation of global standards and rules for intellectual property. In an economically globalized world where information can be instantly sent to anyplace over the Internet, without regard for countries’ borders, location-based rules are increasingly irrelevant and unenforceable.