Raising the Minimum Wage: The Cruelest Tax on Job Growth

It is unlikely that President Biden and his advisers dislike the young, uneducated and unskilled, but their proposal to double the minimum wage to $15 per hour is unspeakably mean.

It pains me that once again I need to give a basic tutorial on supply and demand; but given that so many in the political class and the media are in denial about basic economics, I will give it another try.

Employers do not hire people who cannot produce more in work product than they cost. Teenagers, and other young people, often have not developed the job skills to be worth more than a very low wage. Everyone understands that a person with computer skills or one who knows how to operate technical or heavy machinery is worth a lot more than someone without such abilities. A skilled backhoe operator might easily be worth $30 per hour or more, but a guy with a shovel may only be worth a few dollars an hour if that. 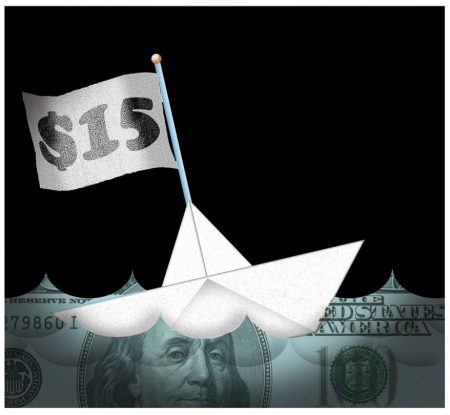 Assume the deck on your house needs to be painted, and the teenage girl next door is willing to do it for $8/hr., so you hire her. But if the government says you must pay her $15 an hour, you might decide to paint it yourself or let it go for another year. The teenager is left without a job to help pay for her schooling, and you have a less attractive deck.

If the government tells an apple grower that he must pay the pickers $15 per hour rather than a market-determined wage of $9 per hour, what do you think will happen to the price of apples? The cost of goods and services is a function of the price of the necessary labor and capital (tools) necessary to produce the product. If the price of labor increases because of a lack of supply or government-induced costs, employers will try to substitute capital (e.g., robots) for labor, and if the costs are still too high they will go out of business.

There is story about the famous economist Milton Friedman on a trip to China during the early days of economic reform — decades ago. The Chinese had taken Professor Friedman out to see a major dam they were building.  Mr. Friedman asked why they were using people with shovels rather than heavy equipment. The Chinese responded, “it is a jobs program.” Mr. Friedman then said, “If so, why don’t you give them spoons.”

The Chinese immediately got the point, and now produce and utilize some of the world’s largest and most advanced construction equipment and trucks. I expect those Chinese working on major construction projects are now being paid perhaps 50 times what the poor guys with shovels were being paid 40 years ago.

High wages are good — but only if they are justified by high productivity which again means trained labor and advanced tools. Meaningful work experience greatly increased productivity for most people. As a teenager, I worked summers as a dairy farm laborer and construction laborer. Many of the tasks that I did now have been automated out of existence — in part, pushed by labor laws and regulations.

In my late teens while going to school, I worked part-time for the Publix supermarket company. They were very well-managed — and have been very successful — and taught me many workplace skills (customer service, store cleanliness, inventory management, team-work, etc.) that proved to be invaluable for the rest of my life. As I recall, they paid me about the going minimum wage at the time to start.

In inflation-adjusted terms, Publix now has a higher minimum starting wage for unskilled people, but well below $15 per hour. If Publix and the other food chains are forced to substantially increase their starting wage, they are likely to accelerate automation, reduce employment and raise prices. The price increases will reduce the real disposable income for their customers, in turn reducing the amount of money they have to spend on other goods and services. This, in turn, will reduce the collective employment in all the other merchants.

Robots of all kinds were already doing many jobs viewed as impossible for a machine to do just a few years ago, and the pandemic has accelerated that trend. Eventually, most unskilled jobs will be done by machines; and the more costly unskilled labor becomes because of higher minimum wages and other regulations, the faster the substitution will take place.

McDonald’s had an ad that said something to the effect, “we want to be the best first job you ever had.” Like other fast-food chains, McDonald’s is increasingly automating — meaning fewer “first jobs.” People in government do young people no favor, including the least skilled, many minorities and immigrants, by putting a prohibitive tax on their ability to get a job in the form of a high minimum wage.

The children of the political, media, professional and managerial class can still often get “first jobs” because of the buddy system among their parents — so a prohibitive tax on the poor has little effect on them.  Saying you are for a high minimum wage for a person without job skills is not compassion but cruelty.