Is more inflation desirable? Those at the Federal Reserve seem to think so, and they have explicitly said their target is 2 percent, or about double the current level.

Why would they argue for a further erosion of the purchasing power of the dollar? It is on the misguided belief (i.e., the long-discredited Phillips Curve) that moderately higher levels of inflation lead to higher levels of employment. The unemployment rate numbers indicate that the United States is now at what was traditionally considered full employment — yet the number of people working as a percentage of the work force is close to a three-decade low. Employers have not had to raise most wages, particularly for the unskilled, because there is such a large pool of unemployed or underemployed people ready to enter the work force when they see the right opportunity.

Those in the government who have the job of determining the rate of inflation have an increasingly difficult job, as more and more of the average person’s income is spent on “services” rather than on goods. There are accurate measures of what a bushel of wheat cost in 1800, 1900, 2000 and today but a smaller and smaller portion of the average person’s income is spent on basic commodities. Thirty years ago, the internet barely existed, and smart phones and tablets had not been invented. Look at all the apps that you use in your smartphone or iPad, then write down on a piece of paper what the cost of all of those items would have been if you had bought them separately three decades ago — camera, TV, alarm clock, books, music, calculator, all the newspapers from around the world that you can now get for free, global almost-free phone calls and many more. Potentially, you have bought millions of dollars of goods and services for a few hundred dollars.

The enclosed table shows the price changes in “real dollars” as measured by the consumer price index over the last 30 years. Most commodities fell in real prices, while a few, like gasoline, rose. Even though the price of gasoline increased, the average driver spends less in real dollars to drive the same distance because cars have become so much more efficient, and this trend will continue as we increasingly move to electric automobiles. The price of gold rose, but this has almost no effect on the typical person’s standard of living. The price of copper rose as a result of the increased depletion of low-cost reserves but, in most cases, aluminum can substitute for copper. 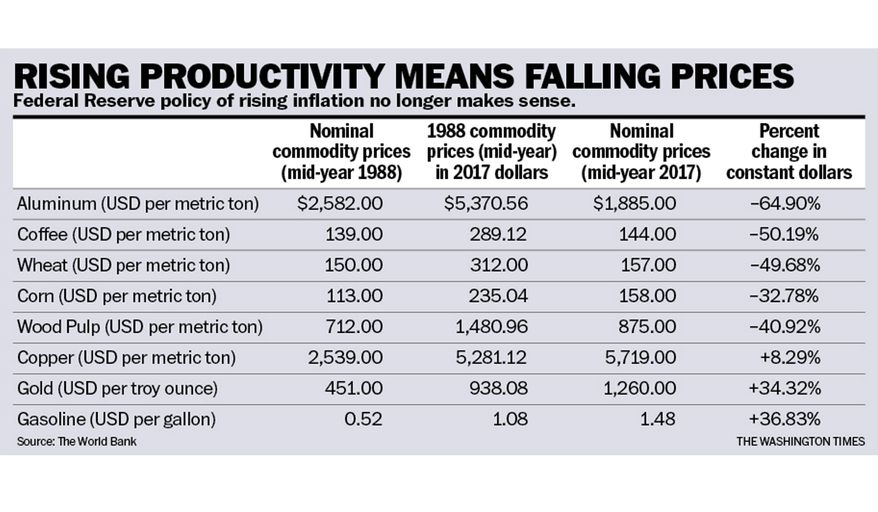 Aluminum will continue to fall in “real price” because, unlike most metals other than gold, it can be endlessly and inexpensively recycled without any loss, and it is the seventh most common element in the earth’s surface. Forty percent of the cost of primary (i.e., new) aluminum is energy but only 5 percent of the recycled cost. As the global stock of aluminum grows and the recycled portion increases, its price will drop relative to other metals. In many cases, it can easily be substituted for plastics and wood as its real price drops.

Agricultural commodities have been dropping in real prices for well over a hundred years — and, as every farmer knows, he or she must grow more each year to have the same income. This is tough for farmers, but it is great for the consumers. The increase in farm productivity is a result of better seeds, fertilizers, equipment and management. But similar increases in productivity are taking place in almost all other sectors of the economy, which is the reason real prices have and will continue to decline for most things.Aluminum will continue to fall in “real price” because, unlike most metals other than gold, it can be endlessly and inexpensively recycled without any loss, and it is the seventh most common element in the earth’s surface. Forty percent of the cost of primary (i.e., new) aluminum is energy but only 5 percent of the recycled cost. As the global stock of aluminum grows and the recycled portion increases, its price will drop relative to other metals. In many cases, it can easily be substituted for plastics and wood as its real price drops.

The only reason nominal prices have risen since governments left the gold standard and moved to fiat currencies over the last hundred years is that they have used excess money creation as a less visible way of taxing. Part of the reason clever people have been trying to develop alternatives to government monopoly money, such as Bitcoin, Ethereum and the others, is to make the new monies a better measure of value. In this, they have failed (note the huge price gyrations in the new digital monies), but they have succeeded in creating money-like products that can reduce transaction costs and greatly increase financial privacy. I am skeptical that the present digital money “mining” restrictions will result in price stability, but great innovations like “block chains” coupled with real backing of a digital currency will ultimately prevail. Some are working on gold-backed money systems using block chains.

The Federal Reserve has arguably reached a dead end in its ability to either raise or lower the rate of inflation for a whole host of reasons that cannot adequately be explained in this short commentary. Jerry Jordan, a leading and insightful monetary economist who was a member of President Reagan’s Council of Economic Advisers and a past president of the Cleveland Federal Reserve Bank, has summarized the current situation: “The historical linkage between the central bank balance sheet (monetary base) and the outstanding money supply has been broken. Without the ability to influence the supply of money, central bank operations have no influence on the rate of inflation.” Mr. Jordan’s arguments can be found in some of his papers on the Cato Institute and Atlas Economic Research Foundation websites for those who wish to learn more.

In sum, monetary policy as we have known it is broken and is unlikely to be put back together again in a satisfactory way. Fortunately, as Nobel Laureate F.A. Hayek explained in his classic paper, “Denationalization of Money,” revised in 1978, there is no need for governments to have a monopoly on money. Private entrepreneurs have in the past and can once again create perfectly good money — which can now become global money, thanks to the digital age.