The Tale of Two Countries and Their Economic Freedom The Venezuelans are corrupt socialists, while the Norwegians maintain free markets

This past week, the “dean of the Venezuelan resistance,” Enrique Aristeguieta Gramcko, was arrested for publishing a video accusing the Maduro government of leading a “narco-tyranny.” There is a normal human tendency to try to shut down opposition when the facts are not on your side. The communists, fascists, and other assorted statists invariably go after those who do not support the party line.

The Washington Post and The New York Times have historically argued for government disclosure and have over the years printed classified material; yet, hypocritically this week they were arguing against the release of the Nunes memo, which upended the Democratic party line of Trump-Russian collusion.

In reference to the memo, The Post falsely said “Trump has handed the Russians classified material.”

Universities, such as Cal Berkeley and Columbia that used to be great defenders of free speech, now do everything they can to shut down the voices of liberty (if only they had the police powers of the Venezuelan government).

Venezuela has the world’s largest oil reserves (even more than Saudi Arabia), yet it has been getting relatively poorer for decades. Norway also has large oil reserves but much smaller than Venezuela, even on a per-capita basis. In 1950, Venezuelans had a higher per capita income than the Norwegians, and it was not until the 1960s that Norwegians finally caught up with the Venezuelans. 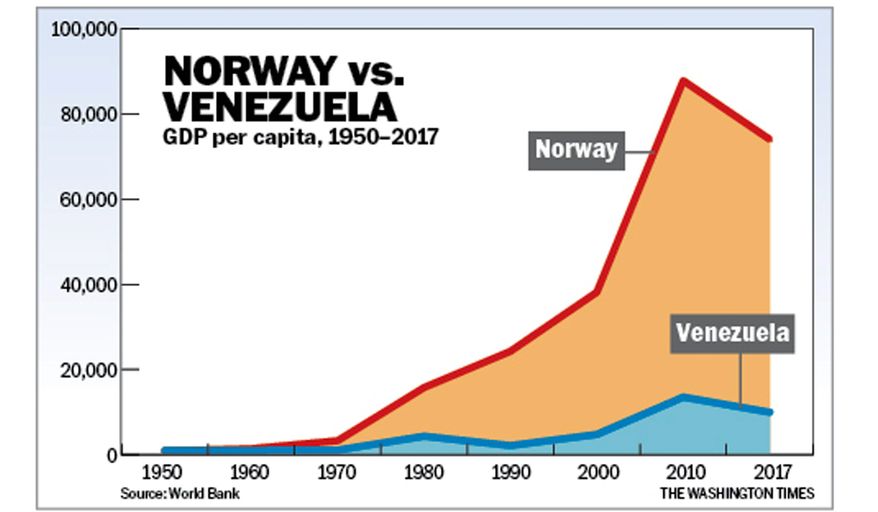 The average Venezuelan should be as rich as the average Norwegian. What went wrong? The Venezuelans became corrupt socialists, while the Norwegians maintained free markets and the institutions of a civil society, such as independent and honest courts. The fact that socialists cannot point to long-term successes is why they need to shut down the voices of the opposition, whether they are found in Cuba, North Korea, Venezuela or American college campuses.

The Norwegians increased economic freedom while the Venezuelans destroyed theirs. In the Economic Freedom of the World Index, Norway ranked 33 in 1975, but had climbed to 25 in 2015. Venezuela ranked 15 back in 1975, but had fallen to the bottom at 159 in 2015. While Norway has inflation in the 2 percent range, Venezuela has printed money, leading to hyperinflation and a currency with almost no purchasing power.

Norway is ranked as one of the least corrupt countries in the world, with a system that upholds the rule of law and protects private property. Venezuela has some of the most corrupt public institutions in the world which have destroyed many civil and political rights — and driven much economic activity into the black economy.

Norway has tax and spending levels well above the growth-maximizing rates. However, the Norwegians have been prudent enough to create an enormous sovereign wealth fund (from some of their oil revenue) to protect themselves from the day that the oil revenues fade.

Venezuelan economist, Hugo Faria, has written a number of papers where he describes the reasons behind the rise and fall of Venezuela. Mr. Faria argues that Venezuela had a high degree of economic freedom between 1920 and 1957 that enabled a high rate of growth. This economic freedom also encouraged increasing democratization of Venezuela, leading to more political freedoms and civil society.

But, as Mr. Faria explains, “The inception of democracy brought more redistributionist policies and greater influence by rent-seeking pressure groups (special interests), whose actions undermined economic freedom so much that economic growth was on average negative from 1960 to 2006.”

Mr. Faria goes on to argue that Venezuela “suffers from a patrimonial government that bribes people, lack of entrepreneurial and political leadership, and the inertial forces of socialism and mercantilism — all of which mutually reinforce each other as they develop.” Mr. Faria paints a bleak future for Venezuela, which seems to be playing out under the Maduro government that may only be corrected by revolution or outside intervention.

The tragedy is that the people of Venezuela should be enjoying a very high per capita income, as are the Norwegians, if they had made better political choices. Sixty years ago, the rise of democracy in Venezuela was seen as only a good, but as the last 3,000 years has shown, unrestrained and uneducated democracy leads to disaster as too many voters view democracy as a means to vote themselves benefits on the backs of others.

The American Founding Fathers were well aware of the problem, which is why they established the U.S. as a federal republic rather than an unbridled democracy. As Venezuela has shown, wealth in natural resources cannot make a society with flawed institutions and systems prosperous and free.