For many decades, Virginia had a well-deserved reputation as a highly civil place where people of different viewpoints accommodated each other and got along, and as a state with a relatively honest and competent government. It is the last place that people expected to have a political civil war. The battle was ignited by the Democratic governor and the new state Democratic legislature declaring war on gun owners. Virginia had been a state with few gun restrictions and wide gun ownership — and with a low crime and murder rate.

The proposed legislation would place severe restrictions on what guns Virginians could own and the size of the magazines. On Monday morning (February 17) in a surprise Virginia Senate committee vote, four Democrats joined with the Republicans to shelve the bill until next year. 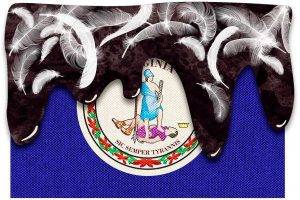 Perhaps, half of the guns in the state would be illegal, under the proposed legislation. Virginia has almost nine million people, and the ATF estimates that there are many more guns than people in the United States so it is safe to say that there are at least 10 million guns in the state. If half of these guns are going to be illegal (which are probably mainly the high-end firearms) — the total replacement value of those guns is likely to be in the range of $5 billion dollars. Of course, the politicians in Richmond did not budget for the purchase of the guns. But, by making guns worthless, it is, in essence, stealing gun owners’ property.

From experiments in other states, we know that most people are not going to give up their guns — so suddenly the state would have made millions of Virginians felons if the legislation passed as written. In Virginia, 91 out of 95 counties, 16 out of 38 independent cities, and 37 towns have declared they are not going to enforce the proposed new gun laws. Unenforceable laws undermine respect for the law and civil society. It is not just the Second Amendment that is being trampled on, but the fundamental God-given right of self-protection both from criminals and from the tyrannical government. The gun for centuries has enabled the weak to protect themselves from being bullied, or worse, by the strong. I know little old ladies who have concealed carry permits — woe any street criminal that tries to mess with them.

The proper way to deal with the problem is for the people to vote out of office all of those who voted for or supported the oppressive legislation. Only U.S. Sen. Mark Warner, Virginia Democrat, is up for statewide election this year, and he is supporting the gun restrictions — so he could be voted out as a form of punishment.

The anti-gun restriction rebellion has caused some local politicians to ask West Virginia to annex their counties (before the Civil War, West Virginia was part of Virginia) which is not going to happen.

Other folks who are really mad are reported to have advocated, probably in jest, a return to tarring and feathering the members of the legislature who are supporting the gun restrictions. (Note: tarring and feathering wayward government officials goes back a least a thousand years in Britain. At the time of the American Revolution, the Patriots tarred and feathered some customs officials — tax collectors — which was well-publicized. Typically, a man who is tarred and feathered was stripped to his waist, covered with tar and then rolled in feathers or had feathers thrown at him. In the few cases of women being subject, they were often covered with molasses rather than tar. The object was usually not to kill the person but to make them suffer and subject to ridicule. In the modern era, super glue would be better than tar because it is not toxic and even more difficult to get off.)  The practice may be amusing but would be a felony.

Other pro-gun rights activists, who are both practical and law abiding, have proposed publicizing the names and pictures of those members of the legislature who are advocating restricting the rights of gun owners. And then encourage people to shun them (shunning is the way that some religious orders use to punish those who misbehave). If an errant state delegate goes to a small restaurant in Culpeper, Virginia, for instance, and the staff deliberately gives him or her little or bad service, they will begin to get the hint. Shunning has the advantage of being both legal and humiliating.

States, like Maryland (next door to Virginia), that have restricted gun rights have often seen a surge in crime — as would be expected because the criminals know that the populace is less able to protect themselves. The gun-restricting politicians say the government will protect you. Ah, the same government that produced the Obamacare website, organized the Iowa caucus count, and keeps illegal felons out of the country.

As a result of vote postponement on Washington’s birthday, Virginia will be a gun liberty battleground for at least another year.