‘Where have All the Smokestacks Gone?’ Private sector can deal with climate-related problems better than the political class

Did you ever see some old stock certificates from more than a half-century ago?

Many of them would have an engraving of a factory spewing smoke from one or more chimneys. This was meant to imply industrial might with an enterprise that employed many workers.

Now, if you drive around America or fly over the country, you rarely see any factory or power plant emitting black or gray smoke. The white plumes coming from power plants and factories are for the most part nothing more than water vapor condensing when it meets the colder air of the atmosphere.

From 1970 to 2017, the aggregate U.S. emissions of the six primary pollutants — nitric oxide, ozone, particulate matter, sulfur dioxide, carbon monoxide and lead — have declined by 73 percent. Ambient concentrations of these harmful pollutants have declined an average of 64 percent since 1990. Since 1970, real GDP increased almost 400 percent.

Each year, most of the country has fewer days with “hazardous air” and, in many places, it is now zero. Fifty years ago, many of America’s rivers and waterways were unsafe to swim in or to consume the fish from — including the Potomac. That has all changed; most rivers have been cleaned up, and seafood from the nation’s waterways is normally safe to eat, not the other way around. The United States has made much greater progress than Europe and most of Asia in cleaning up air and water — despite having engaged is less micro-management insisting on un-economic solar or wind farms, etc. 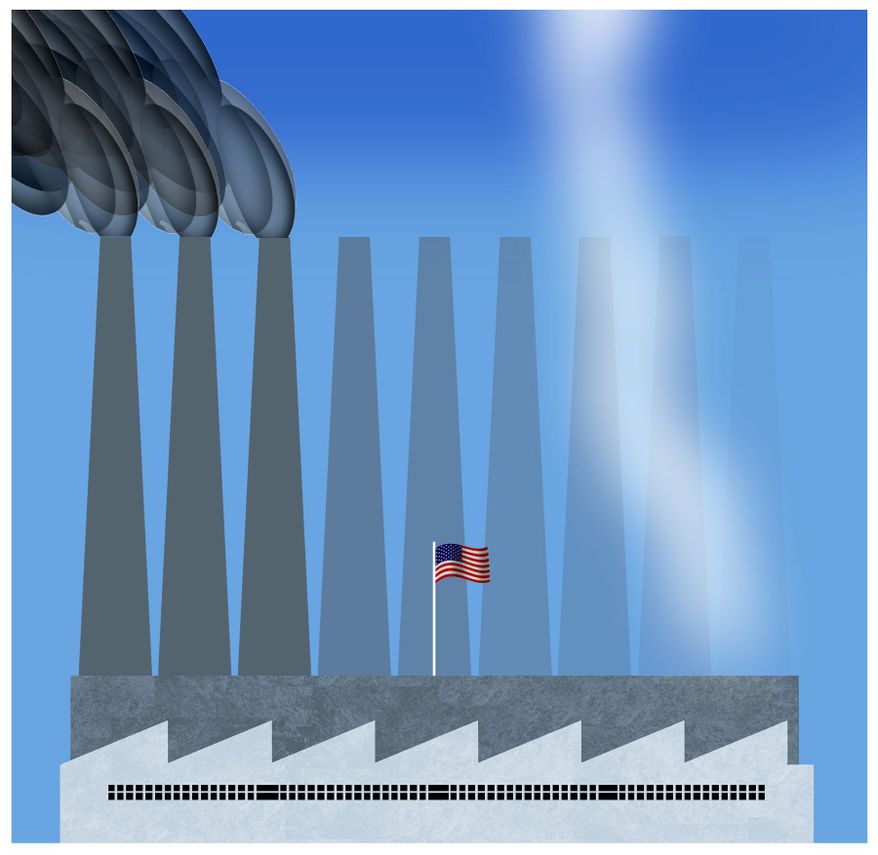 Entrepreneurs in much of the country were left free to experiment with fracking in order to greatly increase the supply of low-pollution natural gas. The result is that both the emissions from the production of electric power and prices fell, and now the U.S. produces more oil and gas than any country in the world. Two decades ago, most of political establishment would have said that is “impossible” — because they never did and still don’t — to understand the power of free markets.

At no time in history, and in any other country, have more people breathed cleaner air and had high-quality clean water at very low cost available to them. It has been less than a century since most dwellings were heated by sooty coal or wood burning fireplaces, stoves or furnaces. Inside air quality was dreadful for most people. Water was often not safe to drink, which is why many consumed so much hard cider or other alcoholic beverages.

Government often set standards for improvement in air and water but, for the most part, the solutions were left up to private-sector innovators.

Most poor countries suffer from the lack of the rule of law and the lack of cheap and reliable energy, particularly electricity. Many in the developed world push these poor countries to heavily invest in “renewables”; but most renewables are not yet that reliable (which is why in rich countries there are normally fossil fuel backup systems), and few can compete with natural gas in terms of price. If poorer countries are saddled with higher power costs than places like America, they will always be at a competitive disadvantage and unable to catch up.

Play a mind game for a minute. Assume that the federal government decided not to allocate any money at all to “cure global warming.” State and local governments could still spend money on it, as well as businesses and other private sector institutions, and of course individuals. What would happen? Low-cost solutions would be sought for very specific identifiable problems. For example, the City of Miami Beach was constructed on essentially a sand bar at sea level a century ago. As a result of sea level rise, it is subject to flooding, so the City decided to raise the level of the city by building new infrastructure (roads, water, sewer, power, etc.) several feet above the old level. The project has been expensive but doable from an engineering standpoint — and at a tiny fraction of the cost of trying to stop sea level rise.

Private landowners who wish to live by the sea will build mounds or put their dwellings on pilings, which is already common along the Gulf of Mexico coast. In this case, the cost has been shifted from taxpayers at large to the person who enjoys most of the benefit. A win-win. As CO2 levels have risen (albeit slower than predicted), farm yields have increased, and farmers have needed to spend less on fertilizer, reducing the cost of food — another win-win. (CO2 is a natural fertilizer, which is the reason greenhouse operators pump it into their greenhouses).

Multi-trillion-dollar government schemes to fight climate change are nothing more than con-jobs for those seeking power. Lower-cost micro solutions developed by the private sector can deal with most problems far better than the political class, including those issues around climate.