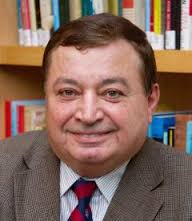 Yuri Maltsev, Professor of Economics at Carthage College in Wisconsin, earned his B.A. and M.A. degrees at Moscow State University, and his Ph.D. in Labor Economics at the Institute of Labour Research in Moscow, Russia. Before defecting to the United States in 1989, he was a Chief Consultant of the Bank for Foreign Trade and then a member of a senior team of Soviet economists that worked on President Gorbachev’s reforms package. Prior to joining Carthage, Dr. Maltsev was a Program Director of the International Center for Development Policy and a Peace Fellow at the United States Institute of Peace in Washington, D.C., a federal research institution. Dr. Maltsev also consulted with different departments of the U.S. government and testified before Congress.

Dr. Maltsev has appeared on Cable Network News, Fox News, PBS NewsHour, CNBC Africa, C-Span, CBC and other American, Canadian, South African, Spanish, Lithuanian and Finnish television and radio programs. He has authored five books and  hundreds of articles published in The Christian Science Monitor, Newsday, Washington Times, Free Market, San Diego Union Tribune, Journal of Commerce, Milwaukee Journal Sentinel, Seattle Times and others. His chapter on Franklin Delano Roosevelt was included in a monumental volume: Reassessing American Presidency published in 2001 in Auburn, Alabama. Now he is working on the second edition of his previously published “Requiem to Marx” (1994). Together with Roman Skaskiw he just published a study of the Tea Party Movement: “The Tea Party Explained. From Crisis to Crusade”, Chicago, Open Court Publishers, 2013.

He also contributed to the Encyclopedia of the World Poverty and numerous other publications. He has lectured at leading universities, corporations, banks, and other schools all over the United States, Canada, Europe, Asia and Africa.

Dr. Maltsev is a Senior Fellow of the Ludwig Von Mises Institute at Auburn, Alabama. He also serves as a member of the advisory boards of the Foundation for Economic Education in Irvington-On-Hudson, New York; Heartland Institute in Chicago, Illinois; and the Quarterly Journal of Austrian Economics published by Transaction Periodicals, Rutgers – The State University of New Jersey. He is listed in “The Guide to Public Policy Experts” of the Heritage Foundation (1991 – present).