Most people plod through life, having an impact on their family and friends, but not much on the rest of humanity. Rulers and despots can impact most everyone’s life, as can those who are responsible for great scientific or engineering breakthroughs. Some musicians and athletes bring pleasure to millions. In other fields, such as economics, it is hard to identify individuals who created much in the way of pleasure or pain, or even directly useful knowledge for his or her fellow man.

President Trump awarded the Medal of Freedom, the nation’s highest civilian honor, to economist Arthur B. Laffer, the “father of supply-side economics,” this past Wednesday. For more than four decades, Art Laffer has had an impact on his fellow Americans and many other people around the world, whether they recognized it or not.

Art Laffer became famous for a concept that he did not develop (the idea behind the Laffer Curve had been known for a couple of thousand years) — and for something he did not say — and that is that all “tax cuts pay for themselves.” What Art and many of the rest of us have said is that some tax-rate cuts, like those on capital gains, often “pay for themselves” in a year or so. Other tax-rate reductions never do — but given enough time, tax-rate reductions on labor and capital, particularly from high levels, can pay for themselves by increasing the long-run size of the economic pie because of the additional work, saving and investment they engender. 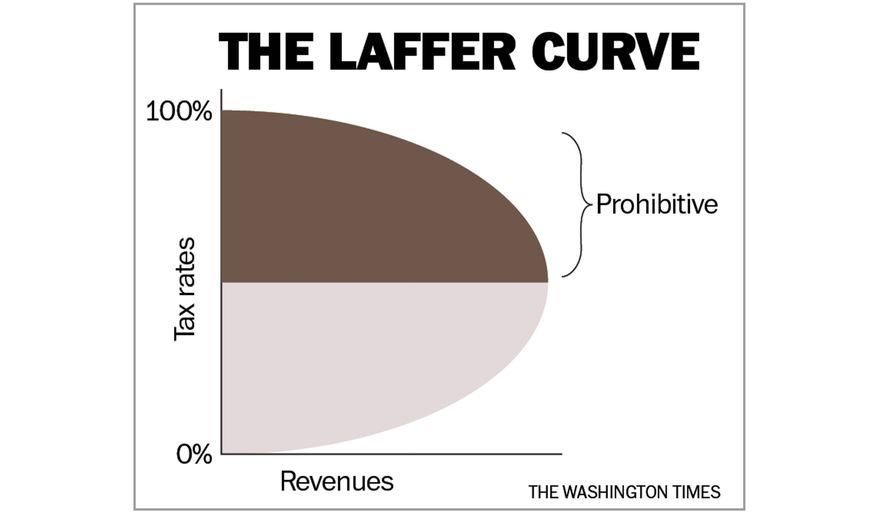 Several years ago, I calculated that the Reagan tax cuts took seven years to “pay for themselves” — still well worth doing. The Laffer Curve (see accompanying illustration) is a graph showing that, at a tax rate of zero or 100 percent, the government receives no revenue — so the revenue-maximizing rate for any tax is somewhere between zero and 100 percent.

What Art Laffer did do was to show how the negative incentive effects of excessive tax rates, regulation and misguided monetary policy made people poorer. The clarity of his explanations helped foster a national debate.

As President Carter noted at the time, the 1970s was a period of economic malaise. Inflation and interest rates were in the double digits, and the economy was flat. Most countries, including the United States, had adopted Keynesian economic policies (named after the British economist John Maynard Keynes) that called for more government spending when “aggregate demand” was insufficient to create full employment.

Each round of new government spending delivered less and less. Central banks, including the U.S. Federal Reserve, kept creating new money as a way to stimulate the economy, but the money creation showed up in the form of inflation rather than real growth. Milton Friedman was the best-known critic of the Keynesian policies, while in Europe, F.A. Hayek was the leading intellectual critic of Keynesian policies.

Friedman and Hayek, despite having a few policy differences, were close friends and agreed that the central problem was too much government (taxing, regulation and spending) that was destroying the incentives to work, save and invest. Art Laffer (Ph.D. Stanford, B.A. Yale) had become the youngest tenured faculty member at the University of Chicago, where he was not only influenced by his older colleagues, including Friedman, but also by a young Canadian economist, Bob Mundell, who had done breakthrough work on “optimum currency areas” and is often regarded as the father of the euro (Mundell went on to win a Nobel Prize in 1999).

Art was not yet famous when I first met him in Chicago in May 1976, but he had the quickest mind and wit of anyone I can recall encountering. Despite the fact that Art was well ahead of me, we quickly bonded, having much the same worldview and, importantly, a similar sense of humor. Part of Art’s genius was his ability to explain to politicians and those in the news media (ordinary people) what had gone wrong with the world economy and what the solutions were. He could do it through storytelling and humor — which some of his critics mistook for being a lightweight, but just the opposite was the truth (Ronald Reagan had the same problem). Like Donald Trump, Art is a showman — but one with great substance.

Art Laffer understood if you don’t entertain your audience few will listen and the underlying message is wasted. Art also understood that he needed a megaphone of media-savvy heavyweights to help him carry the message. Bob Bartley, late editor of The Wall Street Journal editorial page, and his colleague, Jude Wanniski, became big boosters. Art spent countless hours with the late Jack Kemp, helping to teach him economics and how to make the arguments, and Jack, in turn, taught many of his congressional colleagues. Former students of Art’s, such as Steve Entin and Marc Miles, became part of the information army. Tax economists, such as Norman Ture and Alan Reynolds, who independently had reached many of the same conclusions as Art, became additional constructive voices, as have Steve Moore and Dan Mitchell in recent years. George Gilder wrote the best-selling book, “Wealth and Poverty,” based in part on Art’s ideas.

Art was the indispensable man in getting the Reagan tax-rate reductions. Four decades later, Art Laffer is still in the middle of the battle for sound economic policy taking on pompous academic and media reality deniers and know-nothings — the true “cranks” and “fakes.” The nation is richer because of Art Laffer. The well-earned award he received should be viewed as part of our collective thank you.