Americans will Suffer from Biden and Democrats’ Latest Uninformed Decisions Government leaders often fail to understand what information is needed, and they often ignore it for political reasons

Why would an insurance company pay a private meteorological company a fee to provide them with information — about the likelihood of a hurricane landfall and severity and timing in a specific location — when the Weather Bureau provides the information for free? 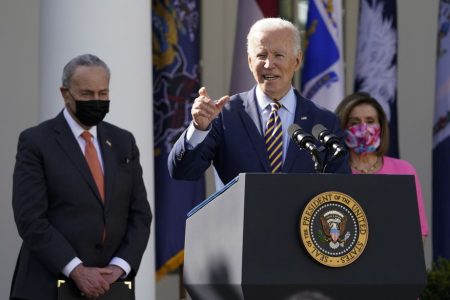 The short answer is some teams of private meteorologists have a track record of being more accurate. This increase in accuracy enables those who buy the information to take actions to save more money than the cost of the information.

The auto insurance business is highly competitive. If one company charges too much, they lose business to their competitors; and if they charge too little, the cost of claims can destroy the company. So, having precise information as to the probability of an individual customer getting into an accident as well as the likely cost of the claim from the accident is vital information for the company to properly price their policies.

Private companies of all stripes that are profitable over long periods of time clearly know how to properly price their products –- which indicates they also know how much to spend on good information.

The disasters of the Suez Canal shutdown, the Mexican border crisis and the COVID-19 mess in New York, New Jersey, Illinois and California can all be attributed in part to bad decisions resulting from the failure to properly evaluate information.

Governments, by contrast, often overspend on many activities while underspending on other activities. Part of the problem is government leaders often fail to understand what information they need and, even when they receive good information, they ignore it for political reasons. The response to COVID-19 required governors to make a number of tradeoff decisions.

What should the priority be in who gets the vaccines? To what degree should the economy be shut down? Should schools remain open for in-person instruction? We now have case studies of the decisions of three different governors — Andrew Cuomo in New York, Ron DeSantis in Florida and Kristi Noem in South Dakota.

Early on, it was known that the elderly with underlying conditions were at the most risk of dying from COVID-19. Florida and South Dakota targeted the elderly for the vaccines and then worked down the list by age. Mr. Cuomo in New York engaged in more political targeting to the detriment of the oldest and sickest.

Schools remained largely open in South Dakota and Florida because the governors understood that the chances of school-aged children being seriously ill or dying from the virus was minimal, and the damage done to the children and their families from a shutdown was much greater than keeping schools open. New York politicians, as well as those in Chicago and elsewhere, buckled to the teachers’ unions (who loved getting paid for less work) despite the enormous damage to the students.

New York, which was almost entirely shut down, had a COVID-19 death rate second only to New Jersey (which was also shut down) and had an unemployment rate of 8.9% (the second highest after Hawaii). South Dakota, which was the most “open” state, had a higher than average COVID-19 death rate, but one that was far below New York’s — and the lowest unemployment rate in the country of only 2.9%.

Florida has had a well below-average COVID-19 death rate, despite being largely open, with a relatively low unemployment rate of 4.7%. Lower unemployment rates are most often associated with better mental health and lower death rates from most causes. Clearly, New York politicians made the worst decisions. South Dakota’s Gov. Noem appears to have traded off a somewhat higher COVID-19 death rate for a much stronger economy and high employment.

The Suez Canal fiasco clearly was a result of the authorities failing to take into account the additional risk of permitting ships longer than the canal is wide. It was known that the ship would be encountering high winds off the desert and that such ships are difficult to precisely control under such conditions — yet no additional precautions appear to have been taken. This is clear failure of basic cost-benefit analysis.

The U.S. illegal immigrant border disaster is another clear example of Biden administration officials ignoring information that was readily available, as to the likely number of illegal immigrants who would try to cross the border in the absence of strong controls (that have recently been dismantled).

There is a legitimate debate about the number of new immigrants that should be legally admitted each year. Those who argue for “open borders” or not strictly enforcing the border merely demonstrate an inability to think beyond “Stage I” and about the consequences of such a policy.

All too many of those in politics and the media ignore available information when they come up with their silly “solutions” for both real and imaginary problems. What was Andrew Cuomo thinking when he ordered putting those infected with COVID-19 in crowded nursing homes? What was Mr. Biden thinking when he said he welcomed those who did not go through the legal immigration procedures?

Congress, under House Speaker Nancy Pelosi and Senate Majority Leader Charles E. Schumer, has done away with the committee-and-hearing process for major pieces of legislation. What they are doing is denying themselves and the other members of Congress information they probably need to make good decisions — and the American people will suffer as a result of those bad decisions.