Biden’s Proposed Infrastructure Spending Is Wasteful, Destructive and Corrupt Government should spend $2 trillion, but where did this number come from?

How much should the U.S. spend on infrastructure projects? President Biden has just proposed to have the government spend approximately $2 trillion dollars on “infrastructure” projects. Where did this number come from? 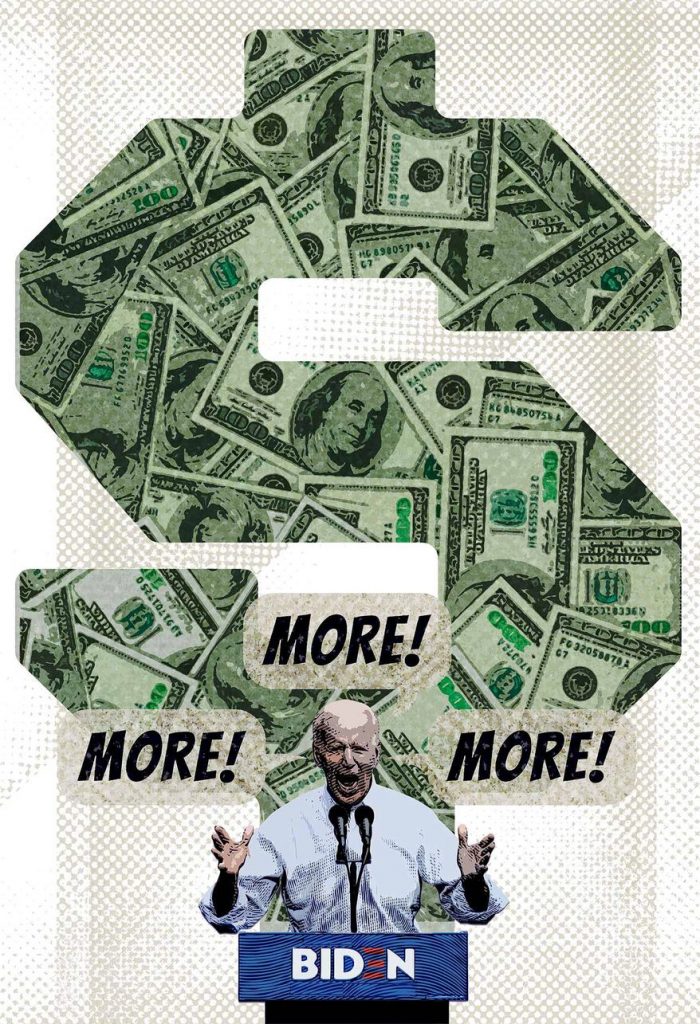 Homeowners frequently need to spend money on “infrastructure,” whether it is a new air conditioning system, deck or sidewalk replacement, etc.  Some expenditure is a structural necessity, others are cosmetic or desired upgrades. If you have a home worth $400,000, you normally do not decide to spend $200,000 in a given year without doing a detailed analysis of how you are going to specifically spend the money and how much each project will cost.

If you live in a condo or a community with a homeowners’ association, most often there is an elected committee of the homeowners that proposes to spend on what they view as necessary repairs (e.g., a new roof) or upgrades (e.g., nicer landscaping). Bids for the projects are solicited, and the owners vote on what to accept or reject.

The elected officials in towns and cities usually propose infrastructure projects each year — a new bridge, or school, or whatever — and the proposals are debated. When infrastructure is going to be financed by bonds, usually the voter has a chance to vote up or down on the proposed bond issue. All of this gives some measure of control and accountability for the projects.

Increasingly, the federal government upends this traditional model and does it all backward. A politician will propose a number — $2 trillion for infrastructure — having no idea of the costs of individual projects that might be funded and whether or not any of them are justified. No citizen can envision how much $ 2 billion is — let alone $2 trillion.

Politicians and somber-looking political commentators will debate whether $2 trillion is too big or too small — none of them, in fact, having the slightest idea of what they are talking about. After all, it is not their money — it is yours. Congress increasingly resembles an old Monty Python skit where everyone is spewing utter nonsense under the guise of dealing with a very serious matter, such as going into battle.

The Foundation for Economic Education (FEE) identified several of the absurd items in the bill, including $20 billion (more than the COVID-19 package spent on vaccines), for “a new program that will reconnect neighborhoods cut off by historic investments and ensure new projects increase opportunity, advance racial equity and environmental justice, and promote affordable access.”

What that sentence really means is that I, as a member of Congress, want to give $20 billion — paid for by hard-working taxpayers — to my political friends for engaging in activities that can neither be defined or measured as to result. It would be hard to write a spending provision that will do more to fuel corruption, waste and economic and social destruction.

The proposal is to give manufacturing subsidies and tax credits — which are again more likely to benefit higher-income people. We are told over and over again by the mainstream media and the politicos that green electric power is or is about to be less expensive than fossil fuels. If that is true, why do we need to subsidize electric cars?

The president has proposed big increases in corporate taxes to pay for, at least, some of all of this new spending. The biggest single item is to increase the corporate tax rate from 21% to 28%. The president and his staff seem to have very short memories. Congress reduced the corporate tax rate during the Trump administration because companies had been moving their “legal homes” to lower-tax rate countries and keeping huge sums of money outside the jurisdiction of the IRS.

If they increase the corporate tax rate, the same old problems will reappear. A corporation is merely a legal form of doing business — so the real question is which individuals pay the “corporate” tax. Most economists’ estimates show that 70% to 100% of the corporate tax is paid for by the company workers in terms of lower real wages and benefits. (Investors can always move their money elsewhere.) A major reason for the great rise in after-tax real incomes by workers during the Trump years and the rise in the stock market stemmed from the cut in the corporate tax rate.

If Mr. Biden and company understood economic history, they would know that they are unlikely to get any real long-term increase in tax revenue from the proposed corporate tax rate increase, but they will see a fall in the growth of worker incomes. The president has also said the corporate tax rate increase would not slow economic growth — again, showing a total lack of understanding of economic history and principles — or perhaps he now believes that his own fantasies are reality.