Will inflation increase, and if so, how will it affect you? The short answer is that many economists, including yours truly, expect inflation to increase. Most measures of human activity get better over time, but not inflation numbers — more on this below.

Economists define inflation as a general increase in the price level where the purchasing power of the money declines. But in the real world, some prices increase while others fall. The government has many measures of inflation — the Consumer Price Index (CPI) being the best known.  Economists frequently use Personal Consumption Expenditures (PCE) in the belief that it gives a slightly better measure of real inflation.

The government tries to measure changes in prices over time for hundreds of different goods and services. Some things are easy to measure — such as the price of a bushel of wheat or corn — where the records of free-market determined prices have existed for these products for well over two centuries, and the nature of the product has changed only very slowly. And at the other end of the spectrum are totally new products that replace many other previously produced goods and services — most notably the smartphone.

Only a couple of decades ago, trans-Atlantic phone calls could cost several dollars a minute. Now, the marginal costs of such calls, depending on the device and communications plan, can cost close to zero — a massive deflation in communications costs. Two decades ago, most people had film cameras which required the purchase of film and then a trip to the photofinisher to get the pictures developed — which involved some significant costs.

Now everyone has far better cameras in their phones, where the pictures cost zero to take and send to others. This means that the purchasing power of dollars spent on photography has soared (huge deflation).

In trying to measure inflation and deflation, government statisticians attempt to determine what people spend for durable goods — those that last more than three years (such as automobiles, furniture, appliances, aircraft, guns, etc.); non-durable goods that are consumed in less than three years (such as food, gasoline, paper, etc.); and services (such as banking and other financial services, maintenance or repair work, transportation, legal services, etc.). 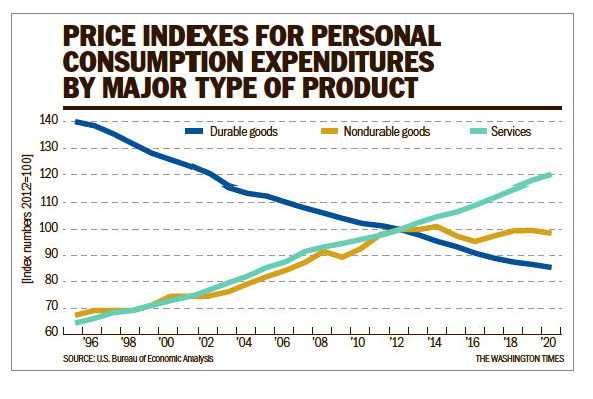 The enclosed chart shows the relative price of average durables has declined for the past 25 years (by about 38%). (The statisticians attempt to factor in product improvement in their price calculations – such as new safety features in automobiles — which is a most difficult task.)

The price declines have been driven by technological progress, including manufacturing efficiency improvements, and the “China effect” whereby much manufacturing was transferred to China and other low-wage countries, enabling Americans to buy many things less expensively. These goods were often sold in Walmart and other highly efficient retailers that could cut margins and prices of great benefit to consumers — making their dollars in effect worth more (deflation).

During this same 25-year period, the price of non-durable goods rose by about 46%. Virtually all of this price rise occurred before 2012, while in the last eight years many prices fell. The fracking revolution reduced the real price of gasoline and natural gas, and huge productivity gains in agriculture continued. Also, deregulation under the Trump administration allowed for many production efficiencies, again reducing prices.

Unfortunately, the new Biden administration is reversing course, and its policies are likely to cause the price of energy and many other goods and services to increase. As the restrictions from the pandemic are lessened, temporary supply shortages will arise, again causing price increases.

For instance, there is a shortage of cargo containers because, as ocean shipping recovers from the shutdown, the demand for containers has soared. This has led to large increases in shipping costs that are, in turn, passed along to the cost of the goods being shipped and, ultimately, higher consumer prices.

Service costs have risen most rapidly (by about 86% in the last 25 years) — in part because productivity gains have been so much lower in the service sector than in the goods sector. Medical and educational services are major components of the services price indices. As measured by student achievement and costs per student, most education has shown negative productivity gain — that is, it costs more today in real terms to achieve reading and math proficiency in the average student than it did a quarter of a century ago.

There have been enormous gains in medical science, but these gains have been offset by the ever-growing medical and paperwork bureaucracy. Tens of millions now have most of their health bills paid in part by Medicare, Medicaid, the VA and other government health insurance and so have little or no idea of how much any given medical procedure costs — and hence are insensitive to the price. As the medical price system has broken down, the ability to measure medical cost inflation has become nearly impossible.

In future columns, I will explain in more detail why the prices of most goods and services are more likely to rise than fall and explore the various ways people can at least partially protect themselves.