How India, China and the U.S. Compete for Global Influence

Will China overtake the United States and will India catch up to China? The world’s three most populous countries are in an increasingly competitive struggle for global influence and domination. The incredible rise of China over the past three decades took most everyone by surprise, and then the awakening and sudden growth in India has caused another surprise.

Forty years ago, both China and India were very poor countries. China was even a bit poorer than India as a result of the imposition of a total Communist system under Mao Zedong. India obtained independence from Britain in 1947, but its first leader, Jawaharlal Nehru, was also a committed socialist who imposed a less authoritarian but very bureaucratic version of socialism on the country. As would be expected, the economic results in both countries were disastrous.

China and India each have more than 1.3 billion citizens, with China slightly larger, but India is expected to overtake China in total population within the next few years. Tensions between these neighboring giants have been an eternal fact of life. The border has been in dispute forever and, just within the last month, another small clash took place between their respective armed forces, inflaming public opinion in India.

After Mao’s death in 1976, Deng Xiaoping gained control. Deng retained the Communist political system but allowed the development of a market economy with private ownership. China was soon able to achieve exceptional growth, with the economy growing more than 10% per year in many years. Forty years of high growth has enabled China to create the world’s second largest economy with per capita incomes equal to middle-income countries.

India slowly and in fits-and-starts opened up its economy, giving it very modest growth until recent years. India is far more diverse than China with many different ethnic, religious and language groups, with English being the only real national language (which is increasingly proving to be an advantage).

The Chinese, being far more brutal in their exercise of power than the Indians, have been able to impose more of a “national culture” and governing system — but even so continue to meet considerable resistance. The Chinese have focused much more than the Indians on building infrastructure. They have built an equivalent to the U.S. interstate highway system, new high-speed railroads and many air and seaports, all of which have reduced transportation costs and time. They have also built many dams, both for flood control and power generation, as well as a large number of coal-fired and nuclear power plants.

The Indians have lagged in all of these areas, in part because the national government has limited powers to override local governments. Because there is functional democracy in India — with a number of political parties — along with a bureaucratic state, it becomes relatively easy to block many needed projects. Despite the impediments, India has made considerable economic progress in recent years under Prime Minister Narendra Modi, who was elected in 2014. Mr. Modi is more of a reformer than his predecessors, but is not a Western-style free marketeer and has protectionist tendencies. 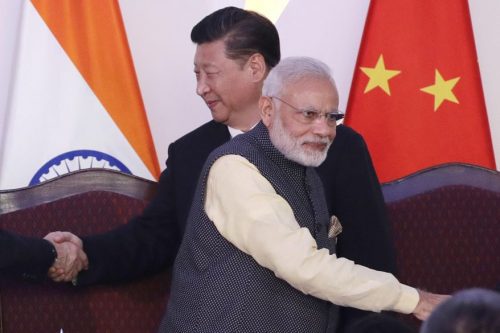 Many have argued, including officials of the Trump administration, for a tilt from China toward India. India has many problems but, unlike China, does attempt to follow the rule of law, and abide by intellectual property and trade agreements.

Two knowledgeable and very experienced (in dealing with both China and India) trade and economic development experts — Bart Fisher and Arun Tiwari — have written a completely up-to-date book, “India Wakes: Post Coronavirus New World Order,” on the history and relationships between China, India and the United States (though published in India, it is easily available to U.S. readers through Amazon).

Mr. Fisher has been a leading trade lawyer and economist for many decades; and, along with his many other publications, he is the author of a classic book on international trade. Mr. Fisher is also an active international businessman and lawyer, as well as an academic, having taught both economics and trade law at a number of U.S. universities.

Mr. Tiwari is a scientist and engineer who has received a number of important rewards for his scientific work. In addition, he has also been heavily involved in both scientific and economic policy in India, serving as adviser to senior Indian government officials. He has co-authored five books with APJ Abdul Kalam, former president of India, and written many other books and important articles.

Mr. Fisher and Mr. Tiwari make the case that it is in the long-term interest of U.S.-based companies to shift more of their investment and resources to India. India is increasingly well positioned to replace China as part of the global supply chain, and India is now and likely will continue to be a rapidly growing market. Mr. Fisher and Mr. Tiwari conclude with a series of recommendations that should be taken by both the Indian and U.S. governments to speed and strengthen the economic relationships between the two countries. This well written and very interesting book makes a real contribution.