If you were going to start a new business in the United States that was not location dependent, what state would choose? Countries, states and cities all compete to attract businesses — both large and small. More businesses mean more jobs and usually greater prosperity.

On Feb. 8, the Small Business and Entrepreneurship Council (SBE) released its annual ranking of the 50 states “according to 55 policy measures, including a wide array of tax, regulatory, and government spending measures.” The findings were not surprising — Nevada, Texas, South Dakota, Wyoming and Florida were at the top, while Vermont, Minnesota, New York, New Jersey and California were at the bottom. What is troublesome is that year after year the business-unfriendly states do so little to improve their rankings. As the author of the study, Raymond J. Keating, chief economist of the SBE Council, noted: “Too many elected officials choose to ignore the basic economic realities of how government affects entrepreneurship, business, and investment.”

Taxes, regulations and excessive red tape and fees are all business and job killers — and often have a disproportionate effect on small and new businesses. Governments that engage in wasteful and inefficient sending and poor delivery of services, such as crime prevention, drive business away. Politicians endlessly cry about the “need” for more taxes and regulations in order to “protect the people.” But in most places, government is already far larger than optimum, and so more taxes and regulations only make things worse. Again, it is no surprise that the most business-friendly states all get by perfectly well without a state income tax, while the least friendly states have many of the highest taxes.

Real annual growth among the top 25 states (from 2010 to 2015) averaged 37 percent faster than the bottom 25 states. Population growth is an indicator of prosperity. People move to where good jobs are. The 25 most business-friendly states had a population growth of more than double the 25 least friendly states.
It is well understood that businesses are hurt by high taxes, but few are aware of the bewildering number and types of taxes that businesses face, all of which influence location and hiring decisions. The following are just some of the taxes that are part of the Small Business Policy Index: personal income tax; individual capital gains tax; individual dividends and interest tax; corporate income tax; corporate capital gains tax; individual alternative minimum tax; corporate alternative minimum tax; property taxes; sales, gross receipts, and excise taxes; death tax; unemployment taxes; internet taxes; remote seller taxes; gas tax; diesel tax; and wireless taxes. If you were a small-business person burdened with all of this, at what point would you give up? 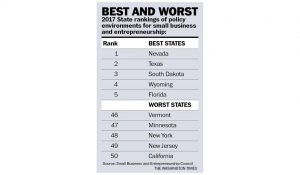 There are many other factors that influence the cost of doing business, such as energy costs. States that encourage the efficient production and consumption of energy tend to have more rapid economic growth than those that do not. States that have right-to-work laws, where employees are not forced to become union members and pay union dues, are more attractive for businesses and, hence, have higher job growth. States that have higher than the federal minimum wage discourage employers from hiring and place a very destructive burden on the young and inexperienced who are not yet productive enough to justify high minimum wages. Mandatory paid family leave or sick leave sound humane, but they can be impossible hurdles for small businesses that do not have sufficient size and flexible work forces to be able to accommodate such policies without incurring business-killing costs.

States that have failed to put reasonable limits on frivolous and costly lawsuits put their businesses at excessive risk, hurting investment and job creation. In the past two decades, damage awards have greatly outpaced inflation — a trend, if allowed to continue, that will result in massive business extinction. States with large numbers of government employees, who tend to be less productive than private-sector employees, put a greater burden on both business and individual taxpayers. Many government employers are actually growth and job destroyers, with activities such as promulgating regulations that do not meet reasonable cost-benefit tests.

Civil asset forfeiture, whereby law enforcement seizes the property of businesses and individuals on the mere suspicion of wrongdoing, rather than being properly convicted in a court of law of some crime, discourages business investment in those states that have not eliminated or strictly limited its use.

The basic function of government is to protect person and property, and secure liberty. States and localities that have allowed high levels of crime to persist have, in essence, said to businesses and entrepreneurs: “Go elsewhere because we will not protect your investment.”

Indices, such as the SBE Council’s “Ranking the States on Policy Measures and Costs Impacting Entrepreneurship and Small Business Growth,” provide a real service, both to policymakers and business people. Competition between businesses gives the consumer better goods and services at lower prices. Competition between state policymakers can result in better and less destructive policies, and thus more jobs at higher wages.