The Good, the Bad, and the Ugly How New York Lost Its Population to Increasing Taxes and Mounting Debt

Last week, there was the pitiful scene of Gov. Andrew Cuomo of New York begging President Trump to restore a tax provision which unfairly benefitted New Yorkers. It seems that many high-income New Yorkers have been moving their tax homes to Florida, undermining the New York tax base.

Those who live in New York City may be paying state and local income tax rates, in addition to the federal tax, of over 12 percent, giving some an overall tax burden of approximately 50 percent. Florida imposes no state and local income taxes in addition to the federal income tax — yet Florida is booming, with a budget surplus, while New York is mired in debt. Only 50 years ago, New York had four times the population of Florida, and now Florida is larger than New York.

New York was the great “Empire State” for well over a century. It was the richest state by far with the largest population. It had arguably the best natural seaport in the world. The Hudson River and Erie Canal system enabled New Yorkers to both access raw materials and export manufactured goods all the way to Minnesota inexpensively by water — and then to and from Europe and the rest of the world.

Western New York State had rich agricultural lands with plenty of rainfall. The City of Buffalo and the surrounding area was a great center of heavy industry, with access to cheap electrical power from nearby Niagara Falls. Rochester was the “silicon valley” of a hundred years ago, with many of the high-tech firms of the time, like Kodak, Bausch and Lomb, and what became Xerox, and many others. New York is rich in natural gas, but the politicians will not allow fracking so it is dependent on other states.

New York also had many outstanding educational institutions, which were great assets to the sciences, culture and business within the state. According to the latest U.S. News survey, Columbia University in New York — founded in 1754 — ranks No. 3 among national universities.

New York has many scenic areas, like the Hudson River Valley, two mountain ranges, the Finger Lakes, the Long Island beaches, Niagara Falls, and much else. The state had everything going for it. But the political class managed to destroy much of what made New York the Empire State with excessive taxes and regulations, and just plain old theft. New York lost the population title, first to California, and then Texas passed it by, and two years ago, Florida ousted New York as the third most-populous state. 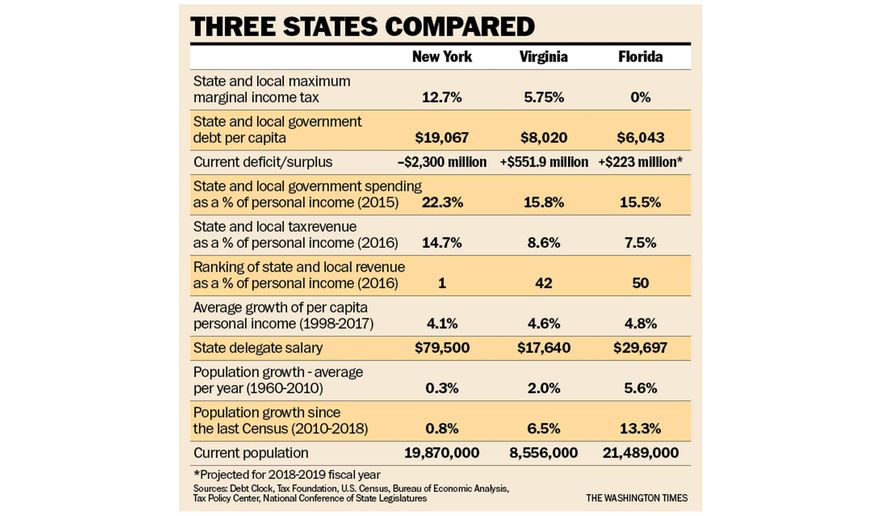 At the beginning of the American Republic in 1790, Virginia had the largest population of the states, but within two decades New York had surpassed it. Much of the Virginia infrastructure was destroyed during the Civil War, and the Commonwealth of Virginia did not fully recover for more than 80 years until after World War II. After coming to terms with the civil rights era, Virginia prospered, with (for the most part) non-corrupt and competent politicians. Political control swept back and forth between highly civil and moderate politicians of both parties. The economy diversified with a major high-tech center in Northern Virginia, and both population and real incomes grew at a solid pace. So both Virginians and the rest of America were shocked when the three top elected officials, all Democrats, revealed themselves not to be Virginia gentlemen but to have feet of clay.

Meanwhile, the state of Florida, without a legacy of great universities and political and cultural institutions, created an environment where businesses could flourish without undue tax burdens and government interference. It went from being a poor state to a prosperous one.

The citizens of New York should be asking: Why they are required to pay such high state and local income tax rates while the citizens of Florida get by perfectly well without any state income tax; Why they have three times more per capita debt than Floridians, and infrastructure that is in far worse shape; Why Virginia and Florida are running budget surpluses while New York is running a huge deficit; Why it takes a third more of their citizens’ personal income to run the government than in Virginia or Florida; Why their state takes twice the percentage of per capita income in taxes than Virginia and Florida; And why their members of the legislature are being paid several times those in Virginia and Florida for doing an inferior job.

When it comes to taxes and government services, people’s feet tell more about how they feel than their mouths.