How would a benevolent dictator have handled the COVID-19 pandemic?  Predictably, Joe Biden is saying Donald Trump did it all wrong and caused a couple of hundred thousand people to die needlessly – a very serious charge if true.  But what was the Biden plan that would have avoided the deaths?  The reason you cannot answer that question is there was no Biden plan back when it really counted.  Little was known about the virus in the spring, which is one reason the great “experts” (e.g., Antony Fauci, et al.) kept changing their advice; and as a result, the political class had little notion of what to do except say the other guy was wrong. 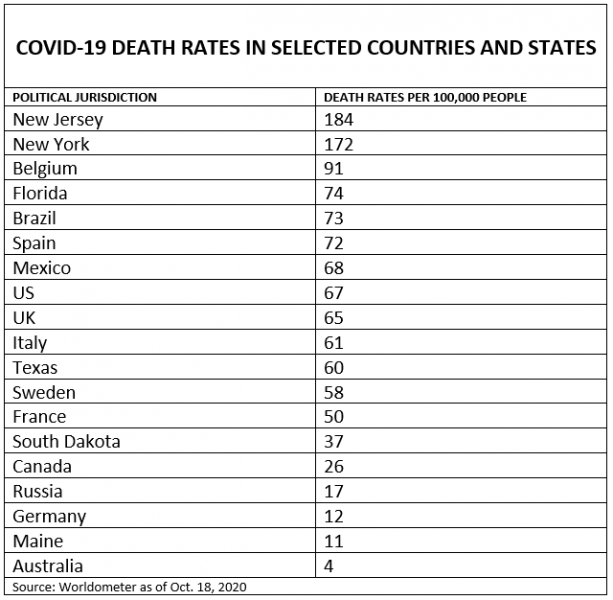 Assume your candidate wins on November 3rd, what should he and Congress do at that point about COVID (for the sake of this discussion, I am assuming the Libertarian Party candidate, Jo Jorgenson, will not win?

The enclosed chart is an update and revision of a chart in my column “The Economic Costs of Riots and COVID-19 Lockdowns” of July 27, 2020.  Again, what is striking is the enormous variation of death rates between political jurisdictions.  There appears to be almost no relationship between the degree of “lockdown” and death rates.  New York and New Jersey continue to have very restrictive policies, but they have had high death rates, primarily because their governors had a policy of putting patients with known infections in nursing homes – the murderous triumph of political correctness over common sense.

Both Sweden and South Dakota had almost no lockdowns, yet a lower fatal case rate than many more restrictive jurisdictions.

There are many problems with this comparative data, much of it revolving around the definition of the “cause of death.”  In some jurisdictions, anyone who has tested positive for COVID will be listed as a COVID death, even though the actual cause of death was a heart attack, or even an automobile accident or suicide.  Other jurisdictions use much more limited definitions of what is a COVID death.  The overwhelming majority of deaths occurs in people who are 75 and older (with underlying conditions), while it is very rare for someone under 30 to die from the virus.  Jurisdictions like Florida and Italy with much higher average age populations would logically be expected to have higher death rates than places with lower average age populations.

Do lockdowns work?  The answer is “yes” in very tightly controlled circumstances and probably “no” for larger population groups that cannot be highly restricted and monitored.  The most successful lockdown has been the NBA bubble whose exceptionally stringent health protocols have worked perfectly to date.  After quarantine, no players were infected and no games impacted.  But players and staff were restricted to three hotels near Orlando, Florida for three months.  The game schedule was limited, and only three arenas were used.  A large medical staff constantly tested and monitored the players and the limited number of others who came in contact with them.  In sum, the players volunteered to be in the world’s most expensive prison – proving that, if the pay is high enough, people will temporarily give up much of their freedom.

For people who do not make millions a year and are not willing to live in a small bubble, the only option is to wait until herd immunity develops.  Herd immunity occurs when a sufficient percentage of the population has acquired immunity by having been infected or vaccinated so the virus can no longer readily spread.  The size of the “immune herd” depends on how easily the virus is transmitted.  It is not yet known what percentage of the population needs to be immune before the “herd” is safe from COVID.

What is known is that the risk of dying from COVID for people under 50 is near zero.  It is less dangerous and inconvenient than the seasonal flu for them.  But the risk rises for people over 50, and for men over 80 the chances of dying from it is about 11.6% – which varies considerably based on risk factors like obesity.

It makes no sense to lock down people under 50, provided they keep social distance and wear masks when around those over 50 who don’t feel the need for the separation.  The lockdowns have imposed huge costs in terms of health (foregone medical treatments and diagnoses of serious conditions), economic deprivation, careers and businesses destroyed, psychological damage, and the general loss of liberty.

Without lockdowns for the young, the virus will spread more rapidly among them – and most will have no or only mild symptoms -achieving herd immunity more quickly.  Businesses should be able to choose their own rules – to mask or not to mask, the degree of social distancing, etc. – but should be required to warn seniors who have not achieved immunity not to enter the business location that has lax rules.  Stores could have “senior hours” as some already do, at which times the rules are tighter.  And yes, this would be age discrimination – but I have little doubt that most seniors would prefer that their children and grandchildren have more freedom, even if their own activities are somewhat restricted.