This Wonderful Era, and Its Exceptions The world is largely at peace, but there is still much to be anxious about

If you could choose to live in any year of the last 2,000, which year would you pick? For every person, some years are better than others; but looking across all of humankind, this year has probably been the best.

The world is largely at peace. While some military conflicts are ongoing, they remain relatively minor and result in far fewer deaths than the wars so common in the last century. Income, wealth and employment opportunities for most people have never been better. This is true not only in the United States and Europe, but also across much of Africa, Asia and South America. Thanks to the end of the Cold War and the spread of capitalism, crippling poverty has given way to growing wealth across much of our planet.

Yet, there is still much to be anxious about. Many countries are economically stagnated but at a high level of economic development. War could easily break out in the Middle East and Ukraine, the dispute between China and Hong Kong may come to an unhappy end, and North Korea remains a prison for its people and a menace to the wider world.

The really good news is that life spans have been increasing rather steadily for several hundred years. When factoring in child mortality, two centuries ago the average European (and American) was dead by age 40. Now, the average citizen of a Western country lives to roughly 80. The first big increase in life spans was caused by the reduction in childhood diseases and accidents. In recent decades, most of the increase in life spans has been caused by advances in the treatment of diseases and disabilities of the elderly.

Over the last few centuries, life has become more civil, with a general decline in violence as shown by the enormous reduction of murder in developed economies. There are still some countries that have the very high murder rates that were common on the planet hundreds of years ago, but that number is diminishing. 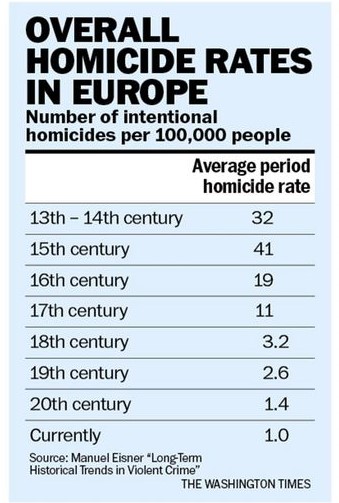 The United States has an overall murder rate of roughly 5 out of 100,000 people. This is high by European standards, but most American homicides tend to take place in a couple of large cities where family structure and law enforcement have broken down. Many areas of the United States have some of the lowest murder rates in the world. And those places with poor public policy tend to have higher murder rates and higher crime rates in general.

Not all big cities are unsafe. New York City, for example, has a murder rate lower than that of the country in general. Meanwhile, Baltimore has a murder rate more than 15 times of that of New York. Cities like St. Louis, Baltimore and Detroit have exceptionally high murder rates and exceptionally high crime rates. New York City is a good example of a city that had a high rate of crime in the 1970s and 1980s; but with the good leadership of Mayors Rudy Giuliani and Michael Bloomberg, violent crime cratered, and economic growth and civil society were restored.

Unfortunately, a number of cities on the West Coast, such as Seattle, Portland, San Francisco and Los Angeles, are making the same mistakes that New York made in the 1970s. The esteemed sociologist and political theorist James Q. Wilson had argued that cities should not tolerate petty crimes, an idea that became known as “broken windows theory.” Wilson’s central insight was that the criminal justice system had to be on the top of shoplifters, hooligans, street gangs and general miscreants. Toleration of petty crimes often leads to bigger crimes. And when the criminal class understands that these crimes will be punished, they in turn alter their behavior.

The situation in the West Coast cities will certainly become far worse until their current policies are reversed. It should be obvious that if you do not prosecute shoplifters who only steal below a predetermined limit, then this will encourage people to steal up to that limit. If there is no penalty for drug use and defecation on the streets, cities will see higher rates of drug use and defecation on the streets.

The great shame is that the political class in these cities has denied basic reality and also the lessons of history. People will only put up with so much, however, and eventually voters who were willing to put up with some decline in their quality of life will get fed up and demand change. The tragedy is that many thousands of people will suffer needlessly until then, particularly those on the margins who the West Coast mayors insist they are trying to help.