Which Candidate do the Chinese and Russians Want to Win the U.S. Presidential Election?

President Trump has caused the Chinese immense difficulty. He was the first American president to call them out for their unfair trade practices, theft of intellectual property and military expansionism. Particularly since the revelation that they were responsible for the COVID-19 pandemic, the president in both word and action — by using sanctions, tariffs and other restrictions — has made the Chinese pay a very high price for their actions. It is only rational for them to want someone other than Mr. Trump. 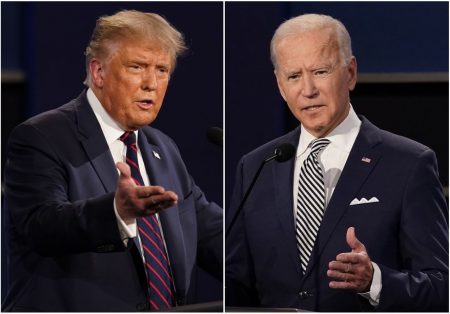 In contrast, former Vice President Joe Biden has shown himself to be open to family enrichment from the Chinese, by way of his son, as exposed by the just-released emails and prior admissions and evidence. The fact that Mr. Biden made the requested introductions and appeared to influence American policy to be more pro-China would naturally make him a Chinese favorite.

Mr. Biden’s defenders claim that there is no evidence that any of the money Hunter Biden received from the Chinese made its way to the former vice president’s pocket. The flow of money is traceable because there are bank records of all international transactions and domestic bank transfers, which are kept in an electronic form. Once the authorization is made for the release of the records, it should be only a matter of hours before the facts are verified.

All of those who have been demanding the release of Mr. Trump’s tax returns, in addition to his very extensive financial disclosures, ought to be equally demanding of the Biden family records — given the seriousness of the charges and the apparent evidence that he took bribes and tried to launder the money.

Russia’s President Vladimir Putin also is very likely to prefer Mr. Biden over Mr. Trump. Mr. Trump has put much tougher sanctions on Russia than Obama-Biden ever did. It is only logical to expect that Mr. Putin sees Mr. Biden as much easier to negotiate with than Mr. Trump.

There is nothing new about countries trying to interfere with other countries’ elections — or ruler selections. The practice has gone on forever. All major countries do it — even the U.S. If one candidate for leadership in a foreign country seems to be more hospitable toward your country than another candidate — it only makes sense to try to help the most likely friend.

Countries try to influence elections by funneling money into the preferred candidate’s campaign in an unidentified way (money laundering). Countries often supply disinformation, as was done against Mr. Trump by the Russians in 2016, through government channels, through friendly reporters who may or may not be on the take, and through business people who have vested interests.

Many people in government, other than elected officials, find it useful to obtain dirt on both those in charge and the opposition for purposes of career advancement, or position protection, or even the ability to engage in implied or explicit blackmail. Some foreign governments are skilled at identifying such individuals and are often in a position to supply useful information as a quid pro quo.

Members of the news media are often in a position to make or break the career of those in government, and hence can influence public policy by making someone a hero or goat. Sophisticated operatives of foreign governments understand that many members of the press are easily influenced by money, sex, food and drink, travel and useful information.

Business people who have or desire to have commercial relationships with foreign countries are often susceptible to making their domestic political choices in a way that will please their foreign partners. For instance, the NBA receives a major portion of its revenue from China and has been overtly kowtowing to the Chinese in recent months. It is doubtful that many NBA players or owners are going to support Mr. Trump.

It is frequently asked why so many major company executives are supporting Mr. Biden over Mr. Trump given that Mr. Trump’s economic policies are much more pro-business and economic growth. One merely needs to look at how much of their revenue is dependent on China one way or another — which is particularly true of the media conglomerates. Despite the (largely false) image of the independent principled reporter or news writer, most of them quickly adapt to the company line (Mr. Trump’s bad, Mr. Biden and China are good) because understandably they desire certain job security.

All of this easily explains why the massive cover-up of the Biden family money scandal. Those who own or control most of the mainstream media properties — successful swamp creatures — had decided that President Joe Biden was in their interest — he could be both bought and managed. Once that decision was made, disquieting facts that could undermine their candidate had to be suppressed, or explained away as “old news” or “not important” no matter how important.

This also explains why the press has spent more effort on trying to sell the notion that Rudy Giuliani is unreliable — who brought the emails to the public forum — than on the authenticity of the emails.

Mr. Trump scares the establishment, not because they think he is going to get us into an unnecessary war or screw up the economy, but because he understands their soft corruption — and might well eliminate some of it along with the attendant money and power.