Wrong Questions, Wrong Measures Government must measure spending effectiveness by what is accomplished, not by how much is spent

Which portion of government spending provides little or no value? The president just released his budget proposal, and the predictable chorus of complaints immediately began from those who want more spending for “whatever.”

A quarter of a century ago, I was leading an economic transition team in Bulgaria (from communism to free-market capitalism). The Bulgarians planned to privatize a major chemical plant they had recently built for what would have beenabout a billion U.S. dollars today. We brought in international industry experts to make an estimate of its real worth.

The Bulgarians were understandably shocked when I had the unpleasant duty to inform them that the plant was essentially worthless. Their technology had already become obsolete. They had lost their markets, which were primarily in the countries of the Soviet Union and Eastern Europe, after the collapse of communism. And their major raw materials, natural gas and petroleum, all had to be imported at the now higher international market price. In sum, they were at an international competitive disadvantage, and the domestic market was too small to take much product.

The Bulgaria chemical plant may be an extreme case of wasteful government spending, but the point is that politicians and government officials all too often measure success by how much is spent on something rather than the value received for the expenditure. By contrast, businesses normally measure success by how much more product (sales) they can produce using fewer labor, raw material, and capital resources.

This process of continuing to produce more with less is in part how we measure productivity gains, which are necessary for a rising standard of living. Most manufactured products get smaller and lighter over time while increasing capability — the computer revolution being the most obvious example. The former communist states used to view success by making things bigger and heavier — e.g. the tons of often unusable shoes produced by a factory as contrasted with how many pairs were sold to willing consumers.

If government operated more like business, each year the citizens ought to receive more government “service” for the same real cost, because of productivity gains. But government agencies and their lobbyists mostly demand bigger budgets each year with no corresponding increase in “service.”

Under the Obama administration, there was a huge increase in spending on food stamps and the number of recipients (with over 44.2 million recipients and the price tag of $71 billion for the taxpayers in 2016). If employment and real incomes rise, as they should with good economic policy, fewer people should require food stamps, not more. The goal should be fewer people being dependent on government — but many politicians and government bureaucrats have a power and money interest in more people being dependent.

The political class is better at naming government programs — to give them a compassionate sound — than managing them. You may have noticed that some Democrats claimed that the president wanted to “kill children” as a result of his budget proposals. President Trump may have his faults, but I don’t think wanting to kill children is one of them. The fact of the matter is that many of the programs labeled as helping children are not cost effective — and that there are more effective and cheaper ways to get a better outcome, as Budget Director Mick Mulvaney has been explaining.

Over the years, numerous studies have shown that total government spending (federal, state, and local) as a share of GDP in the U.S. and most other major countries is greater than it should be to maximize economic growth, job creation, and the general welfare. It should be no surprise that the private sector most often does a far better job in allocating scarce resources than does government. There are thousands of government programs that are wealth subtracting rather than wealth enhancing — for instance, excessive regulation of the coal industry well beyond what was required for clean air cost hundreds of thousands of jobs and increased electric power rates.

Do a simple test. Most government budgets can be now found online. Pick a program, and then divide the total cost by the number of Americans (roughly 325 million) and multiply that by the number of people in your family to determine the cost of the program to your family. And then make the judgment, is it worth it to you? To make this easier, a number of economic think tanks have budget calculator models that you can Google. 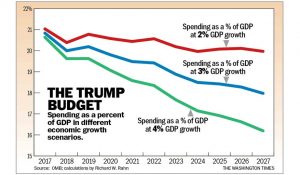 When you hear the political and media whiners talking about draconian Trump budget cuts, it is useful to look at the facts. The president’s budget proposal is to actually increase government spending by $1.7 trillion (from $4.06 to $5.72 trillion) over the next 10 years. This is average growth of almost 3.5 percent per year, and is well above projected inflation. As the accompanying chart shows, the Trump budget does go in the right direction, in that it reduces government spending as a percentage of GDP, because the private sector is expected to grow even faster (Mitchell’s Golden Rule of Fiscal Policy).

A wise and beneficent government measures spending effectiveness on what is accomplished and not on how much is spent. Such a government also restrains total spending as a percentage of GDP so that it is not higher than the growth and welfare maximizing level.