‘You Are Not Going To Die From COVID-19’ COVID-19 resources should focus on elderly with underlying conditions, set rest of humanity free

Good news (please see the accompanying table)! If you are under 65, in reasonably good health and do not have a vitamin D deficiency, you have only a tiny chance of dying from COVID-19. And if you are younger than 34, your chances of dying from the virus are so small as to be almost statistically undetectable. On the other hand, if you are 85 or older, are in a nursing home, have serious health problems and a vitamin D deficiency, you may be in real danger if you are exposed to the virus — but only a tiny portion of the population is in such a condition.

The U.S. population is about 330 million, and the number of people who die each year from all causes is about 2.85 million or a bit less than 1 percent. To date, less than 100,000 people in the United States have died from COVID-19 or three-hundreds of 1 percent. (The peak in deaths appears to have already occurred but even if the number of deaths doubles from the current level, which is most unlikely, the total will be well under one-tenth of 1 percent). 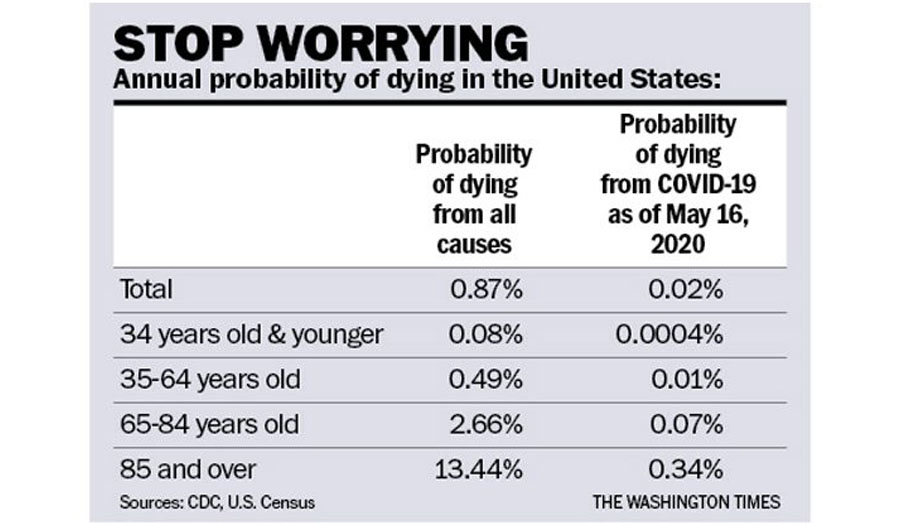 Political leaders have shut down much of the world economy on the basis of bad information and the failure to ask the right questions. Any action to try to stop the spread of the virus should have been accompanied with a competent estimate of how many net lives would be saved by the action.

Net lives means how many people would die from COVID-19 compared to all of the additional lives lost through delayed diagnoses and treatments of cancer, heart disease and all other ailments due to the COVID-19 shutdown. The number of additional suicides and the misery of losing tens of thousands of small businesses, and the loss of liberty also needed to be factored in. Very little of any of that was done.

Early in the year, the leaders of the World Health Organization (WHO) said the virus was unlikely to be transmitted from human to human (given its animal origin) and probably would not be a big threat. It soon became apparent that WHO had been wrong, and the threat was real. The folks at WHO were soon exposed as Chinese puppets — Communists lying? Who would have thought? A group out of Imperial College in the U.K., promoted a model that forecast 2 million or so deaths in the U.S. and millions elsewhere from the virus.

This caused panic among the medical, political and media elites, which resulted in the worldwide shutdown. The model turned out to be deeply flawed, overstating the likely death toll by over 20-fold (aka gross incompetence, or worse).

The fraudulent model was neither closely examined initially, nor rejected because it served certain political and media interests. Political opponents of President Trump were quick to blame him for not acting quickly enough, while ignoring the fact that when he shut down China travel on Jan. 31, they had criticized him for overreacting.

The media loved the story because fear sells newspapers and increases TV ratings, and they could blame it on the hated Mr. Trump. But as is typical with the many in the media, they did not think beyond stage I, and as the economy was needlessly sent into the tank, advertisers withdrew. Circulation and ratings may be up, but fewer advertisers are paying the freight, so many of those who promoted the panic are and will be losing their jobs. Ah, divine justice.

Serious scholars, like Professor Anne Marie Knott of Washington University in St. Louis, a mathematician who also understands economics, has prepared a very clear short presentation, “Why you haven’t caught COVID-19,” explaining how the data demonstrates that most people, especially the young, will never contract the virus and for those who do, most will have a totally benign or mild reaction.

Her presentation may be found on YouTube at: Anne Marie Knott: Why you haven’t caught COVID-19. Again, the only real danger is for a very small percentage of people over 65, except for those 85 and older, who have other serious problems. Ms. Knott’s analysis clearly shows that the costs of the shutdown are greatly exceeding the benefits.

Mr. Trump, the political leaders in both parties, and particularly the mainstream media were too easily seduced by well-meaning “experts” like Dr. Anthony Fauci. Most of the medical experts, understandably, have a very narrow focus and do not fully consider total costs and benefits of their recommendations and actions.

Now that we have sufficient global data and “petri dish” experiments (from U.S. Navy and commercial cruise ships that were quarantined for more than 14 days) to understand the real risks to various groups) there is no longer justification for most restrictions on those under 65. Resources should be concentrated on the elderly with underlying conditions — and the rest of humanity should be allowed to go free and resume normal lives.