The folks in Washington have a knack for almost always asking the wrong question, and then coming up with an answer that makes things worse. The current debate about tax reform is a prime example. Many Democratic critics, some Republican critics (mainly from the conservative side), and many in the media argue that we cannot “afford” a tax cut. In reality, we cannot afford not to cut tax rates.

The real question is this: Could the United States obtain higher levels of growth and more jobs at higher real wages with tax rate reductions? The U.S. has been suffering from very slow economic growth and stagnant real wages for the past decade. The causes are clear — too much regulation, government spending and mismanagement, and a destructive tax system. Other countries do a far better job of meeting the real needs of their citizens with lower tax rates and a smaller tax burden, as can be seen in the accompanying table. There are several (non-petro) states that have higher real incomes and longer life expectancies than the U.S. All have a lower tax burden (i.e., total taxes as a percentage of GDP) than the U.S. They also have lower rates of poverty and better student test scores. 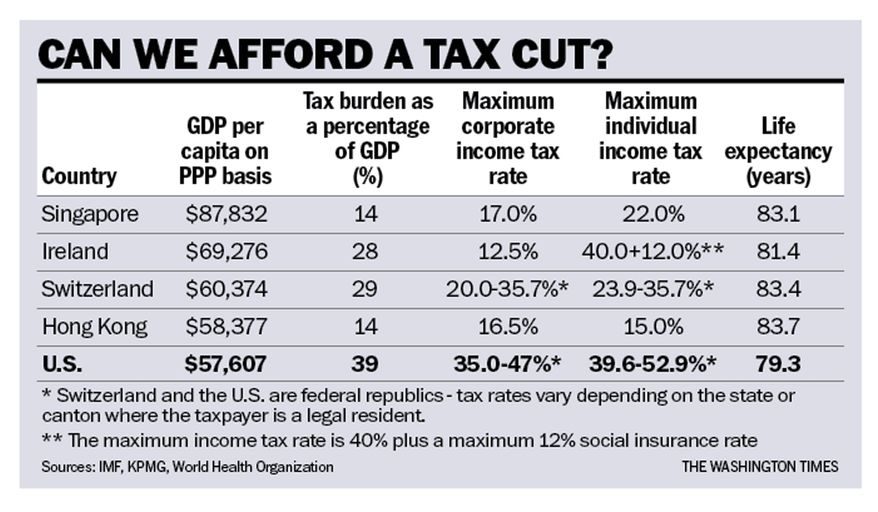 Switzerland, Singapore and Ireland are all free-market democracies, which rank higher than the U.S. in both of the major indexes of economic freedom and life expectancy. Hong Kong is a leader in economic freedom, but not a democracy, and is now a “special zone” of China, since its handover from the British two decades ago. Hong Kong still enjoys the rule of law (the British common law) and has a low level of corruption. Most basic freedoms still exist, even though the Chinese have become increasingly meddlesome, particularly regarding press freedoms.

The argument will be made that the countries with higher real incomes than the U.S. do not have to spend much on national defense. True, but unlike the U.S., they are all natural resource-poor. The U.S. spends 3.3 percent of gross domestic product (GDP) on defense. If the other high-income countries spent an equal portion of their GDP on defense paid for by taxation, they still would enjoy a much lower tax burden. All of the higher-income countries are small compared to the U.S. But why should small size mean that they can do so much more with less? The answer is that government is closer to the people, and hence the mismanagement, waste and corruption found in almost all governments are more obvious and thus easier to control.

The American Founding Fathers were well aware of the dangers of big government. They designed a system where the federal government would have few duties — the most important being national defense — and the state and local governments would take care of most other governmental responsibilities. Yet for the last century, there has been an increased concentration of power and money in Washington, diminishing the role of the states and local governments.

The population of Switzerland (8.4 million) is about the average size of a U.S. state and is able to perform all of the necessary functions of a sovereign country. The Swiss modeled their 1848 Constitution after the U.S. Constitution, so like the U.S., they are a federal republic. But unlike the U.S., they really stuck with federalism, and most decisions, taxes and expenditures are done by the cantons (states) and localities. This results in much more internal competition on taxation, spending and regulation, leading to more efficient government. Switzerland, unlike the U.S., is running a budget surplus.

There is plenty of room to cut taxes and spending. Cutting tax rates on productive saving and investment is almost always a plus because the private sector tends to be much more efficient than government in allocating capital. In addition, there are many studies which show that much government spending is value-subtracting rather than value-adding.

The problem is not a lack of tax revenue, but over-centralization, duplication and mismanagement of the revenue the government already collects. Both the House and Senate tax bills are incomplete steps in the right direction and should yield substantially higher growth. Other countries have shown that it is possible to have a prosperous economy, a high degree of liberty, and the people well protected with much lower levels of taxation and government expenditure. If the United States returned to true federalism — devolving power, taxation and spending back to the states and localities — the competition among the states would likely result in lower taxation and more efficient government.